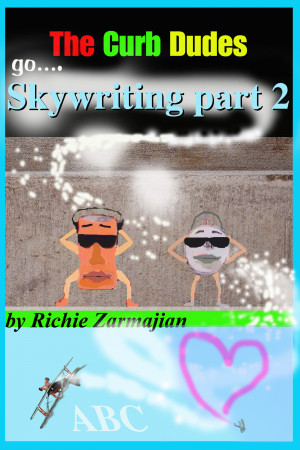 By Richie Zarmajian
The Curb Dudes go skywriting letters A, B & C is a fun adventure ebook kids will love. Helping Parents get kids to sleep. More
'The Curb Dudes', Fizzy Cola and Clocky are on their second skywriting mission. They are flying through the sky in their toy plane getting ready to skywrite. With Clocky as co-pilot and Fizzy Cola as pilot controlling the plane. Fizzy presses the 'skywriting smoke button' on the dashboard of their plane and they skywrite the letters A, B and C. The Dudes will then skywrite a 'Pink Love Heart' and a smiley face for the kids. But Fizzy has lost the landing instructions for their plane, so the Dudes are sent into chaos. The eBook contains pictures that Parents and kids will love. This story is filled with fun, laughter, adventure and mellow sleep-time moments.
Available ebook formats: epub mobi pdf lrf pdb html
First 30% Sample: epub mobi (Kindle) lrf more Online Reader
pdb
Price: $3.99 USD
Buy Add to Library Give as a Gift
How gifting works
Create Widget
Tags: bedtime story flying a plane kids 2 to 5 pictures books letters of the alphabet skywriting
About Richie Zarmajian

Richie Zarmajian has made many Indie songs and short films, and music videos, Zarmajian Likes to work in the family, kids market and cartooning.

As a recording artist He also enjoys playing electric Lead guitar on his Albums. The Albums are Available online for Digital download.
inspired by Warner bros Looney tunes, Disney animation, and comic books, star wars. Zarmajian became interested in storytelling and take people on a journey through words, and visual.

The Curb Dudes eBooks were an idea for short videos released on youtube. Zarmajian decided to write the stories for kids eBooks.

&quot;I have been writing for years now, especially lyrics, poetry, and short film scripts. Short films for Youtube Writer/Director/Voice over including Audiobooks, then I decided to try eBooks&quot; ~ Richie Zarmajian.

About the Series: The Curb Dudes ~ Skywriting

The Curb Dudes are on a mission, helping parents get kids to sleep.

You have subscribed to Smashwords Alerts new release notifications for Richie Zarmajian.

You have been added to Richie Zarmajian's favorite list.

You can also sign-up to receive email notifications whenever Richie Zarmajian releases a new book.