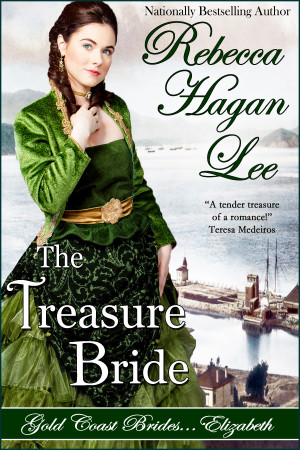 By Rebecca Hagan Lee
Rated 5.00/5 based on 2 reviews
Elizabeth Sadler came to San Francisco with a heart full of hope. After her dreams of a bright future are dashed, she finds unlikely solace in the arms of a stranger. A gorgeous railroad tycoon who just happens to be looking for a governess for his four motherless daughters. More
Can a gentleman looking for a governess find the greatest treasure of all?

When James Craig is awakened by the sound of a woman’s weeping, he fears he’s once again being haunted by a ghost from his past. The powerful railroad tycoon has given up all hope of escaping his nightmares. But when he opens his hotel room door, he finds not a memory, but a flesh-and-blood woman. A woman who makes him ache to take her into his arms and dry her tears…

Elizabeth Sadler came to San Francisco with a heart full of hope. After her dreams of a bright future are dashed, she finds unlikely solace in the arms of a stranger. A stranger who just happens to be looking for a governess for his four motherless daughters.

Although she tries to resist their charms, Elizabeth soon finds James’s little girls — his “Treasures” — sneaking their way past her defenses. But it’s their handsome father who poses an even greater danger to her battered heart as Elizabeth finds his stolen kisses and tender touches utterly irresistible. As the shadows of the past gather around them, James and Elizabeth must decide just how many dangers they’re willing to brave to claim the greatest treasure of all — true love.

Book 1 of the Gold Coast Brides series, which includes THE TREASURE BRIDE, THE SILK BRIDE and THE HEIRESS BRIDE (Coming Soon)

“Rebecca Hagan Lee is a writer on the rise!”—Romantic Times

After arming herself with a degree in fine arts and experience in radio, television, and film, Rebecca Hagan Lee wrote her first novel Golden Chances. Since then, she’s published numerous bestselling and award-winning novels and three novellas.

She’s won a Waldenbooks Award, a Georgia Romance Writers Maggie Award, several Romantic Times awards, been nominated for an RWA Rita Award and has been published in nine languages.

She currently lives in Georgia with her husband, her two beloved Quarter Horses, and a miniature schnauzer named after literary icon Harper Lee.

Reviews of The Treasure Bride by Rebecca Hagan Lee

just lovely!!! like all of this aurors books! i enjoyed it a lot.

You have subscribed to alerts for Rebecca Hagan Lee.

You have been added to Rebecca Hagan Lee's favorite list.

You can also sign-up to receive email notifications whenever Rebecca Hagan Lee releases a new book.