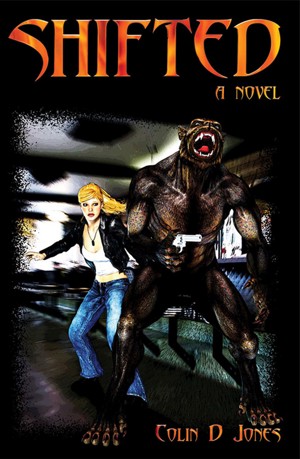 By Colin D. Jones
Young Mark Arsenault is haunted by a flickering, ghostly figure, and by a bestial presence lurking beneath his skin. As he comes of age, he learns they are far stranger than he could have dared guess; their fates entangled with the fabric of reality itself. Pursued by government agents, Mark struggles to understand his true nature... More
Growing up in an abusive home during the waning days of the Cold War, young Mark Arsenault has only two steadfast companions. One is a flickering apparition that appears only near the borders of sleep, whispering riddles about an apocalyptic future. The other is a bestial, inhuman entity looking out at the world through Mark's own eyes.

As he comes of age in a world of moon shots and atom smashers, Mark learns his companions are far stranger than he could have dared guess. Their fates are inextricably entangled not only with his own, but with that of reality itself. Pursued by shadowy government agents and police, Mark must risk all to understand his true nature, to save the woman he loves, and to prevent a cosmological catastrophe. To do so, he must become the thing he has always feared most, a creature of Norse myth too terrifying to unleash in this world.

Even in elementary school, Colin D. Jones expressed a goal of someday writing science fiction. Despite showing a strong aptitude in writing, his teachers were generally less than supportive. "They told me there was no future in that," Jones says. "The mantra they chanted was that writing and art were fine things, but one couldn't expect to make a living at it. To put food on the table, I'd need a 'real job'."

Undaunted, Jones talked the school secretary into letting him use the mimeograph machine, which he used to produce a weekly student newspaper. "I was drawing cartoons, printing lists of jokes, and writing stories. I had a tendency toward subversion, though, and they finally barred me from going anywhere near office equipment."

In high school, Jones says, he decided to put his creative talents to use someday as an engineer. "Mathematics intrigued me. At the time, the U.S. space program was still booming, and my thinking was something like, 'Why write science fiction when I can live it?' "

But in college, Jones was drawn back to writing. "I had an English instructor who was the faculty advisor for the college paper. I was writing essays about space technology and making straight A's, and he asked if I'd like to have a couple of my essays published. It didn't take me long to switch majors, get out of engineering, and get back to playing with the language."

After college, Jones married and did some freelance work, writing articles on aerospace technology for mass-market publications such as the now-defunct magazine, Future. "I supplemented my income from writing by working as everything from a home insulator to a short-order cook at a steakhouse. Eventually, I wound up as the assistant manager of a shoe store and the boss, seeing my obvious lack of enthusiasm, fired me."

Jones decided to enlist for service with the U.S. Army. Initially, he signed on to do radio repair work since military journalism slots were scarce. Two months into his tour, one of Jones' commanders learned of his writing experience, and arranged a special duty assignment to the post newspaper. "The Battalion Commander learned I'd done some commercial writing, and asked to see my portfolio," Jones says. "He was a huge science buff, and there was a slot for the assignment. I spent most of my Army career behind either a typewriter or a camera." After active service, Jones served as a reservist with the 10th Psychological Operations Battalion in St. Louis, Missouri, where his writing and graphics skills were put to further use.

In 1986, Jones began a post-military career in the public sector, where he remains today.

"During the late 1980s," Jones says, "I took up my interest in fiction writing again. I spent about ten years trying to publish short fiction, but the market was drying up. Around 1996, I was looking through a huge box I had of rejection slips and said, 'To Hell with this. This is a waste of time'."

But Jones' couldn't stay away from the keyboard for long. After running a successful web design business for some years, Jones decided to get serious about writing fiction. "I came back to my first love unexpectedly," he says. "I was reading Grettir's Saga, a piece of old Norse literature online when—BAM!—the idea for Shifted hit me. I started compiling research and developing an outline immediately. I don't think I slept for a couple of days while I roughed out the plot, and I had many sleepless nights over the next two years as I actually wrote the thing."

When not writing in his spare time, Jones enjoys spending time with his wife and family, motorcycle riding, trips to the firing range (Jones is, among other things, an NRA-certified firearms instructor who has shot competitively), hiking, reading and playing with CG graphics.

You have subscribed to alerts for Colin D. Jones.

You have been added to Colin D. Jones's favorite list.

You can also sign-up to receive email notifications whenever Colin D. Jones releases a new book.