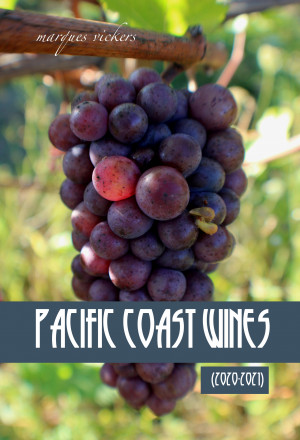 The 2020-2021 edition is ideal for wine collectors, winemakers and anyone who appreciates a world class Pacific Coast grown vintage. The following facts are just ten from hundreds of little known essentials included in the book:

3. California harvested 3.9 million tons of wine grapes during the 2019 harvest, a 9.4% reduction from the 2018 largest historic harvest.

6. Pinot Noir is Oregon’s largest harvested grape accounting for 58.8% of the state’s wine grape production and fifth highest priced. It is California’s fifth most popular.

7. Oregon’s production most closely compares with the Napa Valley growing region of California (159.7 thousand tons in 2019).

8. Chardonnay is California’s largest harvested grape accounting for 36% of the white wine grapes and 16.3% of the state’s overall yield. It is Washington’s second largest wine grape, most popular white wine grape. It is Oregon’s third largest produced.

9. California’s wines were considered the equal to European’s elite vintages in 1890. Following the phylloxera pest and Prohibition, the state would not regain their global reputation until the mid-1970s. Washington’s international reputation began during the 1990s and Oregon’s during the 1980s.

He was born in 1957 and raised in Vallejo, California. He is a 1979 Business Administration graduate from Azusa Pacific University in the Los Angeles area. Following graduation, he became the Public Relations and ultimately Executive Director of the Burbank Chamber of Commerce between 1979-84. He subsequently became the Vice President of Sales for AsTRA Tours and Travel in Westwood between 1984-86.

Following a one-year residence in Dijon, France where he studied at the University of Bourgogne, he began Marquis Enterprises in 1987. His company operations have included sports apparel exporting, travel and tour operations, wine brokering, publishing, rare book and collectibles reselling. He has established numerous e-commerce, barter exchange and art websites including MarquesV.com, ArtsInAmerica.com, InsiderSeriesBooks.com, DiscountVintages.com and WineScalper.com.

Between 2005-2009, he relocated to the Languedoc region of southern France. He concentrated on his painting and sculptural work while restoring two 19th century stone village residences. His figurative painting, photography and sculptural works have been sold and exhibited internationally since 1986. He re-established his Pacific Coast residence in 2009 and has focused his creative productivity on writing and photography.

He has two daughters, Charline and Caroline who presently reside in Europe.

You have subscribed to alerts for Marques Vickers.

You have been added to Marques Vickers's favorite list.

You can also sign-up to receive email notifications whenever Marques Vickers releases a new book.