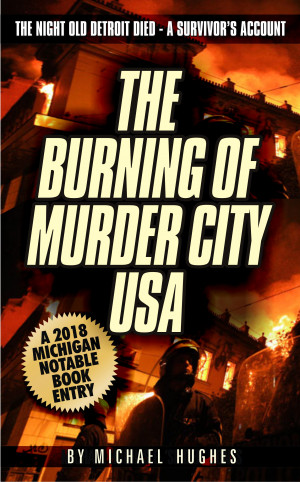 The Burning of Murder City USA

By Michael C. Hughes
Rated 4.00/5 based on 1 reviews
Detroit in 1950 was a bustling metropolis, the most advanced and fastest growing city on the planet at the time... "Motor City USA": a place with the brightest of futures. But by 1967 it was being called "Murder City USA" and, in July of that year, tensions that had been simmering for too many years finally blew. In four days of rioting Blackbottom, the heart and soul of old black Detroit, burned. More
In 1920, Detroit was a bustling city of almost a million people. It was also the most technologically advanced and fastest growing city on the entire planet at the time. All thanks to the auto assembly line that was invented there and had been booming since Henry Ford rolled out the first Model T in 1908. A city with the brightest of futures.

By 1950, Detroit was known as Motor City, and was one the main engines driving American prosperity. The population had swelled to two million and Detroit still had the brightest future in America. But problems were already setting in. Unemployed blacks fleeing poverty of the Deep South were arriving in numbers so large even the automakers couldn’t provide jobs for everyone. Migration into the city was proving to be a slow-burning fuse. GIs ―both black and white―who had returned from WWII did not want to fight again for jobs on the lines. Nor did other blacks already living in the city lucky enough to have jobs with the Big Three: Ford, GM, and Chrysler. Many new arrivals faced limited job prospects and simply gave up and went on the welfare rolls to survive.

By the 1960s, Detroit had become even better known as Motown, one of the new music capitals of the world. But it was also slipping into a place of Darwinian struggle—survival of the fittest and the most desperate: too many still fighting for jobs available. But by the mid ‘60s bitterness and racial tensions had set in. Not just tensions between blacks and the almost all-white police force, but just as much between blacks and blacks. Downtown Detroit began to empty of white people entirely as they fled by the thousands to the suburbs and small towns outside the city, which left blacks to war with each other for very limited downtown turf. The city core was spinning out of control and Detroit was eventually overtaken by a mindless kind of violence. Attacks for no reason: violence for the sake of striking out at someone. Anyone. No one was safe downtown any more.

But by 1967 the city had earned an entirely new name: the sickening epithet Murder City USA. The highest murder rate in America for many years in a row by then. The people who lived there, feeling trapped and with no way out, could see and feel the city unraveling. They knew they were living in a powder keg.
Then, in the small hours of a searing Saturday night in July of that year, it blew. For four days Detroit was filled with gunfire and looting as the city burned. More a Vietnam battle zone than a once-great American city. When it was over, forty-three were dead, many hundreds were injured, and more than fourteen hundred homes, buildings, and businesses were burned and leveled. Much of the area around 12th Street was a burned-out smoldering ruins. An area many blacks called Blackbottom, the heart and soul of old black Detroit, died in those four days.

One of those who lived there and saw it all coming in person was my good friend Spider Jones. He saw, as a boy growing up, all the signs of a city primed to blow. And he was there that fateful night when the first bottle smashed against the wall at 2:00 a.m. and he got sprayed by glass shards as rioting took hold all around him. They swept through downtown with a life of their own, moving as fast as the flames. Spider got out alive—barely. This is Spider’s story. And Detroit's. An I-was-there first-hand chronicle of the years leading up to the riots of 1967 and four nights and days in the firestorm.

Raised in Battle Creek, Michigan, Michael had a successful career as a journalist and news editor before launching his own marketing/PR firm. Det. Ty Connell is a hybrid character based on police officers Michael has known well at city, state, and federal levels. He also counts as a reliable source a formerly active member of one of New York City's major crime families since retired from "the Life." In addition to the Ty Connell Series, Michael has written biographies of two colorful sports/media personalities, as well as a chronicle of events leading up to what were called "the Detroit Race Riots of 1967." That book, THE BURNING OF MURDER CITY USA, was a nominee for the 2018 Michigan Notable Book of the year. It is also available in eBook and paperback.

Nobody taught us this stuff in history class. Maybe they're afraid it will give us ideas. It's like another galaxy, and it's scary. This really happened like when my g-rents were teens? Now I want to know what else we don't know about the Sixties. Can't a gurl just be nozy? These four days of the collapse of Detroit are a real-life dystopia. They're not making this up.

You have subscribed to alerts for Michael C. Hughes.

You have been added to Michael C. Hughes's favorite list.

You can also sign-up to receive email notifications whenever Michael C. Hughes releases a new book.