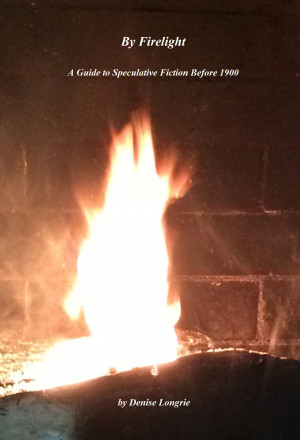 By Firelight A Guide to Speculative Fiction Before 1900

By Denise Longrie
This is a compilation of reviews and short author bios of pre-1900 speculative fiction, such as John Polidori’s “The Vampyre” and Elizabeth Gaskell’s “The Grey Woman.” More
Those who read by candlelight in centuries past left us an embarrassment of riches in stories of ghosts, werewolves, and other spooks, of lost loves and lost worlds, and of the then new world of science. This book, with its one hundred spoiler-free reviews, is your guide to many of those old tales. It offers plot summaries, analyses, not-quite humble opinions, and short author biographies, all told in a lively and engaging style.

Denise Longrie’s first foray into writing, undertaken at the age of seven, depicted the capture of a remarkably cooperative wild horse and displayed an equally remarkable disregard for the laws of physics. Her world has broadened since then and her respect for the laws of physics has come through experience, such as falling off flesh-and-blood horses.

In college, she studied journalism in the days when students used contraptions called typewriters.

Among her published work are several poems, appearing in small press periodicals. She has a self-published chapbook of poetry, Sotto Voce, and a self-published short story, Always Coming Home in which no one falls off a horse. She edited her mother’s memoirs of immigration to the U.S. as a teenager. A budding Esperantist, (saluton, nekonatajn amikojn!), she is also currently working a retelling of the Sigurd/Siegfried myths, titled Siegfried Dragon Slayer.

You have subscribed to alerts for Denise Longrie.

You have been added to Denise Longrie's favorite list.

You can also sign-up to receive email notifications whenever Denise Longrie releases a new book.