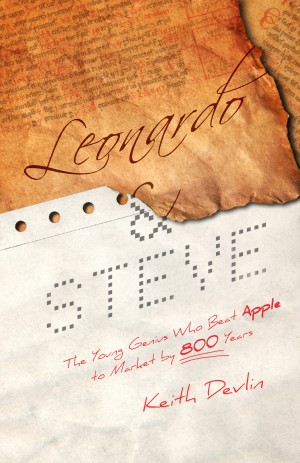 Leonardo and Steve: The Young Genius Who Beat Apple to Market by 800 Years

In 1202, 32-year old Italian Leonardo of Pisa finished one of the most influential books of all time, which introduced modern arithmetic to Western Europe. Devised in India in the 7th and 8th centuries and brought to North Africa by Muslim traders, the Hindu-Arabic system helped transform the West into the dominant force in science, technology, and commerce, leaving behind Muslim cultures which had long known it but had failed to see its potential. Leonardo had learned the Hindu number system when he traveled to North Africa with his father, a customs agent. The book he created was Liber Abbaci, the "Book of Calculation," and the revolution that followed its publication was enormous. Arithmetic made it possible for ordinary people to buy and sell goods, convert currencies, and keep accurate records of possessions more readily than ever before. Liber Abbaci's publication led directly to large-scale international commerce and the scientific revolution of the Renaissance.

In "Leonardo & Steve," Devlin shows the uncanny parallels between Leonardo's arithmetic revolution that took place in Tuscany in the Thirteenth Century and the one that began in California's Silicon Valley in more recent times. It is a story about the personal computing revolution that occurred in the 1980s, but with the novel twist that it was actually history repeating itself.

Dr. Keith Devlin is a mathematician at Stanford University in California. He is a co-founder and Executive Director of the university's H-STAR institute, a co-founder of the Stanford Media X research network, and a Senior Researcher at CSLI. He has written 31 books and over 80 published research articles. His books have been awarded the Pythagoras Prize and the Peano Prize, and his writing has earned him the Carl Sagan Award, and the Joint Policy Board for Mathematics Communications Award. In 2003, he was recognized by the California State Assembly for his "innovative work and longtime service in the field of mathematics and its relation to logic and linguistics." He is "the Math Guy" on National Public Radio. (Archived at http://www.stanford.edu/~kdevlin/MathGuy.html.)

He is a World Economic Forum Fellow and a Fellow of the American Association for the Advancement of Science. His current research is focused on the use of different media to teach and communicate mathematics to diverse audiences. He also works on the design of information/reasoning systems for intelligence analysis. Other research interests include: theory of information, models of reasoning, applications of mathematical techniques in the study of communication, and mathematical cognition.

He writes a monthly column for the Mathematical Association of America, "Devlin's Angle": http://www.maa.org/devlin/devangle.html

I am an Information Management Systems major and Leonardo and Steve: The Young Genius Who Beat Apple to Market by 800 Years was very informative from an historical perspective. The transition from the Roman numberial system of accounting to an Hindu-Arabic system method that all the merchants could employ reminded me of how MS-DOS operating systems were replaced by more easier-to-use systems such as Mac-OS, UNIX-LINUX,etc.

You have subscribed to alerts for Keith Devlin.

You have been added to Keith Devlin's favorite list.

You can also sign-up to receive email notifications whenever Keith Devlin releases a new book.