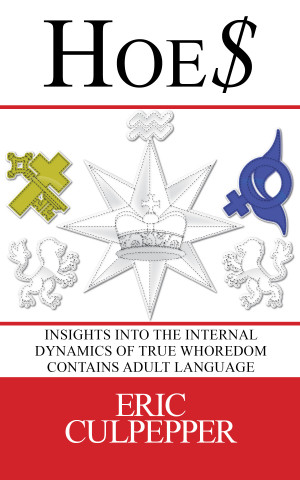 Hoe$: Insights Into The Internal Dynamics Of True Whoredom

Hoe$, which is composed of unique true whore elements and select whore specific elements from Pimps: The Raw Truth Grand Inquisitor Level Pimpnological Conclusions, completely shatters age old gross misconceptions that people have about what a true whore is, what a true whore does, who in fact is a true whore and what in fact drives women to engage in true whoredom.

Hello, my name is Eric Culpepper, I am a freelance writer of what is ultimately a series of rare and extremely highly informative self-help and self-information books that have been designed specifically to aid readers in clearly understanding subjects that are far beyond the realm of general mainstream cultural awareness such as precisely who has in fact long been in complete control of the entirety of modern civilization and the mysterious factors that drive individuals to live the self-destructive lifestyles that are relentlessly pursued by panderers and prostitutes.

I am a native of Memphis, Tennessee., which is a major center of both religious and pimpnological studies and being a direct product of both of these directly parallel cultures I am an omni-dimensional grand inquisitor level theologian lineage master pimpnological decryptologist {as is clearly displayed in my extremely highly informative work titled "Unsurvivable Ignorance: The Raw Truth About The Black Girl Curse, Globalism & Why We Are All Called Monkeys"} who is a widely traveled and extremely highly experienced criminal profiler and long term dedicated pimpnological researcher and tactical analyst who has spent the better part of my life etymologically dissecting and analyzing classic religious works and investigating cultures of pandering and prostitution everywhere from Tokyo to Taipei to Toronto to Tennessee in the course of my global travels and the direct result of nearly a lifetime of immersion into the world of pandering and prostitution is that my "Pimpilicious Perspectives Book Series" is able to give readers a correct 360 degree understanding of the true core internal dynamics of pandering and prostitution and very clearly and concisely shatter age old grossly incorrect misconceptions that people have about precisely what a true pimp or whore in fact is and precisely what drives individuals to engage in the mortally self-destructive lifestyle that is relentlessly pursued by those functioning on all sides of the lurid world of pandering and prostitution.

Though I have published a series of "Pimpilicious Perspectives" that are ultimately works of raw, incontrovertible and totally unparalleled insight into all relevant aspects of "The Truth About Pimpology" and the rarely encountered real truth about the very real Phantom Menace that has relentlessly plagued humanity, especially Blacks and Asians, for innumerable millennium, I have in fact also long wanted to write a few works of tactical analysis of pandering and prostitution that would properly inform and in fact benefit people as opposed to doing the general public a horrible disservice and with "Pimps: The Raw Truth Grand Inquisitor Level Pimpnological Conclusions," "Hoe$: Insights Into The Internal Dynamics Of True Whoredom," "My Pimp Wife: How My Loving Japanese Wife Evolved Into A Cold, Heartless Pimp" and my highly effective articulation and vocabulary building App "Geekalicious" at GeekaliciousApp.com and Google Play I have been able to accomplish this long time goal.

You have subscribed to alerts for Eric Culpepper.

You have been added to Eric Culpepper's favorite list.

You can also sign-up to receive email notifications whenever Eric Culpepper releases a new book.