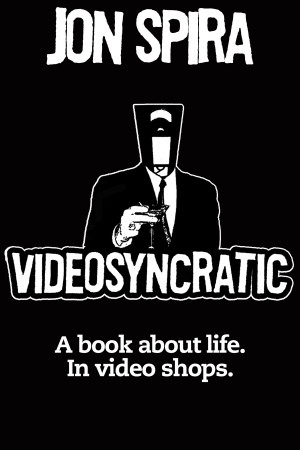 Videosyncratic. A book about life. In video shops.

By Jon Spira
A caustically funny journey spanning the 30 year life of the UK Video rental industry through the eyes of a laconic till-jockey-turned-manager-turned-owner. The 'Kitchen Confidential' of video stores. More
"I love this book. It is funny and sad and sharp
and clever and, every now and then, fantastically
naughty. It will make you feel both keening
nostalgia for the lost days of video shops and
joyful relief that you never have to go into
Blockbuster ever again." - Sam Jordison
Guardian critic, editor of Crap Towns.

"Videosyncratic is a memoir both of one
man’s passion and of the rise and fall of the
video industry, the story of dreams fulfilled
and then toppled. It’s funny, unexpected,
and unwaveringly honest." - Susie Dent

VHS vs Betamax, toploaders, video nasties, late fees, the art of adjusting the tracking. These are things only recently forgotten by society, along with the culture of the video rental shop.

VIDEOSYNCRATIC does for video shops what 'Kitchen Confidential' did for restaurants. It's a rough-and-tumble insider's view of an industry which spanned from the early 80s through the 00s.

Film-maker and writer Jon Spira spills the beans about his thirty-odd years in the video rental industry from wide-eyed child of the aisles to teenage obsessive to laconic till jockey to stressed-out manager to badly-behaved owner. From the birth to the death of the video shop, he was there in corporate shops, local chains and proud indies.

It has everything you could want from a book on video shops - corporate sleaze, indie hijinks, triumph, failure, grown adults being dragged out of shops by their ears, awkward sex in the VHS section and film geekery of the highest order.

It features a foreword from lexicographer and star of TV's Countdown Susie Dent.

Everything he has ever done somehow relates to films.
He went to film school in Edinburgh in the mid-nineties and upon graduation became a screenwriter on the cult sci-fi TV show LEXX. After this, he became a jobbing film-maker directing corporate work and music videos for the likes of Dive Dive, Family Machine and Frank Turner.

Having spent most of his teens and early-twenties working in video shops, in 2001 Jon, with his father, opened Videosyncratic - an indie video shop focused on curation and quality. A second branch followed in 2005.

In 2011, Jon's first feature length documentary ANYONE CAN PLAY GUITAR was released in cinemas. It tells the story of the small-town Oxford music scene which gave the world Radiohead, Foals, Supergrass, Ride and Swervedriver. It is narrated by Stewart Lee.

In 2013, Jon became the in-house documentary film-maker for the British Film Institute.

In 2016, Jon's second feature length documentary ELSTREE 1976 was released globally. It's a film about people who were background extras or had tiny roles in the first Star Wars film and how that brief experience went on to shape their lives over the following 40 years.

Jon has written for The Huffington Post, The Daily Telegraph, the BFI and many questionable blogs and film geek websites.

VIDEOSYNCRATIC is Jon's first book. It's a memoir of his three decades in video shops. It has a foreword by Susie Dent and is the exact size of a VHS video tape.

You have subscribed to alerts for Jon Spira.

You have been added to Jon Spira's favorite list.

You can also sign-up to receive email notifications whenever Jon Spira releases a new book.