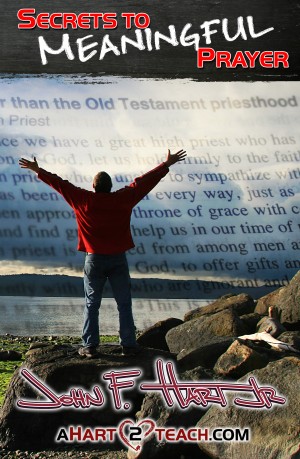 By John F. Hart Jr.
Many people have prayed for years without the desired results so they've given up. Many have tried to talk to God but feel like it's been a waste of their time. Let this book show you that prayer is not just a magic formula to get what you want, but a way to build a relationship with God that can unleash His power in your life. It uses real examples to help you experience meaningful prayer.
Available ebook formats: epub mobi pdf rtf lrf pdb txt html
First 35% Sample: epub mobi (Kindle) lrf more Online Reader
pdb
Price: $6.99 USD
Buy Add to Library Give as a Gift
How gifting works
Create Widget
Tags: god jesus prayer communication gods will pray praying
About John F. Hart Jr.

John Hart currently lives in North Carolina with his wife of 24 years, Kathy. They have two children Philip and Daphne. John grew up in North Carolina but his family moved several times during his school years giving him the opportunity to live and learn in several different states. John has worked in several capacities over the years including mechanic, salesman & CEO of a million dollar company. He is an Inventor, has played Men’s Power Volleyball at the National level and raced 600cc Motorcycles at the AMA Professional level. Through many of these experiences in life God has taught John how to apply the Truths of Scripture in a personal and inspirational way. John has committed himself to the study and teaching of God’s Word. Whether he’s writing, ministering to racers at the track or teaching in a church or prison, John works hard to convey truth with word pictures that are easy to understand. His passion and calling are to communicate the attributes of God to a hurting and doubting world, by dealing with topics that are meaningful and relevant to today’s culture, without compromising the Truth of God’s Word. He can be contacted at aHart2Teach.com

Vending Machine
We're all guilty at times of trying to use God as a vending machine. In this funny video author John Hart teaches how we should use the privilege of prayer more constructively.

Just Try Harder
Sometimes the answer to life is not to "Just Try Harder". Life can be demanding and when you give 100% of yourself and it still doesn't seem like enough it's pretty frustrating. In this video author John Hart shows you how to use the privaledge of prayer so God can give you His direction.

Would you like to favorite John F. Hart Jr.?

You have been added to John F. Hart Jr.'s favorite list.