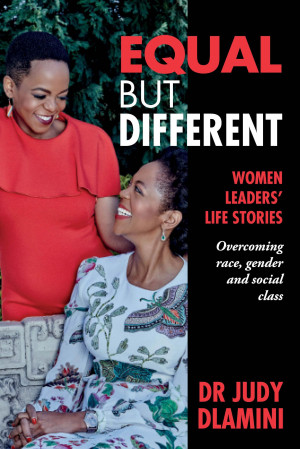 By Dr Judy Dlamini
WOMEN LEADERS’ LIFE STORIES: Overcoming Race, Gender & Social Class More
“My interest in this area of study is based on my strong belief that people are born equal but different. It is a belief that equity across gender, race, social class and sexual orientation will be attained in my lifetime”.

Equal but different is based on my doctoral thesis which investigated the intersection of race, gender and social class in women leaders’ career progression. The women leaders came up with strategies for gender transformation at leadership level. The book presents life stories of women leaders in South Africa and abroad and men who believe in gender equality and contributed towards this goal. The common thread across the life stories of women who contributed to the book are:
 A message from family that said ‘’you can be anything that you set your mind to be’’
 Supportive men who sponsored and mentored them.
 Pursuit of education
 Determination to succeed
 Your initial social class should not determine the person you become. Though the lower your initial social class is, the harder you have to work to achieve your
ambitious dreams.

This book is relevant for people across gender, race and social class who want advice on personal strategies and tactics to succeed; leaders who want to be inclusive with an empowerment agenda for minorities; mentors across gender, corporate and government leaders who are committed to transformation.

Judy is the founder and CEO of the Mbekani Group. She’s former Chairman of Aspen Pharmacare Limited a JSE-listed South African pharmaceutical manufacturer with an extensive global presence. Mbekani celebrated 20 years in business in 2016. The group has operations and investments in different sectors.

Judy qualified as a medical doctor & practised for many years before consulting in Occupational Health for various companies. After completing her MBA, she joined HSBC Investment Bank, Johannesburg division, in Corporate Finance. She obtained Doctorate in Business Leadership from UNISA where she investigated the intersection of race, gender and social class in women CEOs’ career progression and strategies for gender transformation at leadership level. One of the academic contributions from her research is the WHEEL Theoretical Model.

You have subscribed to alerts for Dr Judy Dlamini.

You have been added to Dr Judy Dlamini's favorite list.

You can also sign-up to receive email notifications whenever Dr Judy Dlamini releases a new book.