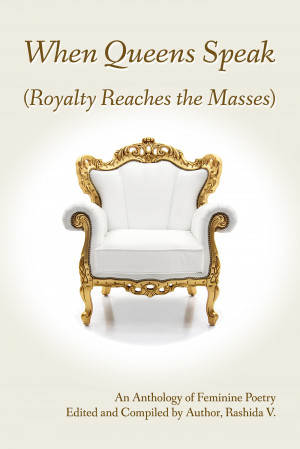 This E-book is a wonderful Anthology of poetry written by multiple American women. It's eclectic, thought provoking and sincere. Each poem will enlighten or awaken the mind, the heart or the soul that engages. A dope work of feminine poetic energy surged into one. This is a must read.
Download: epub mobi (Kindle) pdf more Online Reader
lrf pdb txt
Price: Free! USD
Add to Library
Create Widget
Tags: poetry anthologyofpoems femalepoetry bookofpoems poetry2017 whenqueenspeak
About Rashida V.

Rashida V., a college educated, sibling of 7, hailing via the city of Newark, NJ.
An author, poetess, short-story writer. A true lover of words. To date, I have produced 2 books: My first-a solo project 'From The Abundance of My Pen,' released in May, 2016. Secondly; 'When Queens Speak' an anthology of poetry from 14 feminine voices, released in April, 2017.
I have also been featured in several anthologies: A Literary Assault on The American Mind, Love in Color, The Poetic Soul Talk Show Magazine, Voices Unheard, Brown Molasses Sunday, Erogenous Zone, & S.O.U.L Magazine volumes 1-8. In the works currently are two short stories and 1 book of love poems, soon to be released.
As it stands, I am currently learning to speak Spanish and hope to produce a short story in it's beautiful language one day.

Reviews of When Queens Speak by Rashida V.

You have subscribed to Smashwords Alerts new release notifications for Rashida V..

You have been added to Rashida V.'s favorite list.

You can also sign-up to receive email notifications whenever Rashida V. releases a new book.