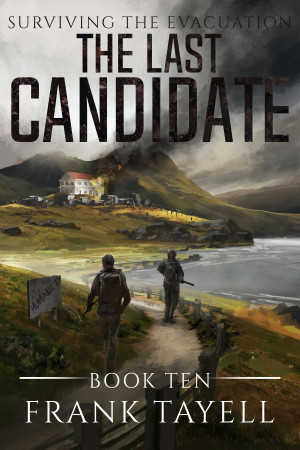 By Frank Tayell
Nine months after the outbreak, ten thousand survivors have found a refuge on the Welsh island of Anglesey. Hordes of the undead ravage the wastelands. Food, fuel, and ammunition are running low. Intended as an alternative to a slide into despotism, an election is called. Anglesey is on the verge of collapse, and humanity is on the brink of extinction. More
Whoever wins the election, humanity will lose.

Nine months after the outbreak, ten thousand survivors from across the globe have found a refuge on the Welsh island of Anglesey. Hordes of the undead ravage the wastelands of Britain and Ireland. Satellite images show that the rest of the world is no better. Food, fuel, and ammunition are running low and there are no more old-world supplies with which to replace them.
Intended as an alternative to a slide into despotism, an election is called. It is hoped the contest will bring forth solutions to the myriad crises facing this last bastion of humanity. After the favoured candidate is hospitalised, suspicion falls on the new frontrunner, a publican who purchased his support with an impossible promise of a return to the pre-apocalyptic world. With no viable candidate, and no way of calling off the election, those who still have access to a ship plan their departure; others plan to rig the contest; a few give up on all plans for a future beyond tomorrow. Anglesey is on the verge of collapse, and humanity is on the brink of extinction.

Set in Belfast, the Isle of Man, and Wales during the run-up to the election on Anglesey, this is the sixth volume of Bill Wright’s journals.
Available ebook formats: epub
Price: $3.99 USD
Buy Add to Library Give as a Gift
How gifting works
Create Widget
Tags: end of the world political thriller election dystopian survival horror apocalyptic thriller zombie apocalypse british apocalypse undead outbreak
About Frank Tayell

Reviews of Surviving The Evacuation, Book 10: The Last Candidate by Frank Tayell