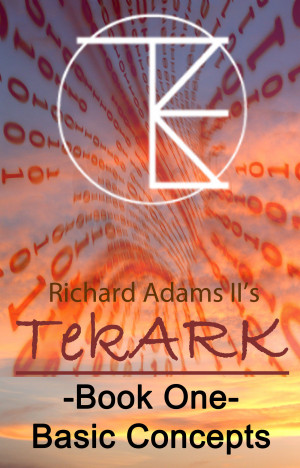 In Book One, we explore some of the most basic and fundamental of concepts that pave the way towards exploring the notion of a simulated reality and still later works. Topics that are discussed include the rate of mankind's progress in technological wonders, the idea of human civilization as a constantly maturing and evolving singular entity, where God is in today's world and why He hasn't "appeared" of late, and the actual divine legitimacy of most major religions.

Furthermore, in beginning to set the stage for delving into such simulated ideas, we explore the idea that advanced technology and ideas are in fact indistinguishable from "magic", how Creators are almost always reflected in their own Creations, and the assertion that science and God are one and the very same! In addition to all of this content, there is a lengthy overview of everything the TekARK trilogy will contain included at the very beginning of this work.

As already stated, the ultimate goal of Book One is to both lay the groundwork for what's to come alongside answering a few eternal questions we all pose, such as where God is in today's world. It also puts forth certain essential concepts, such as the idea that all major religious faiths and their primary sacred works did indeed come from the very same, quite real, God/divinity.

This work is primarily intended for those who have been searching for their faith, yet have always come up empty thus far; those of a realist/scientific bent, who seek to explore their own faith whilst still retaining their core principles and understandings; or merely the curious and inquisitive sort, who are perfectly content in their beliefs but are always desiring to continue expanding their minds with new knowledge.

TekARK sprung out of my own beliefs, consisting entirely of them, when I myself found that no existing faith adhered to exactly what I saw and thought of this world. Since my beliefs evolved to become so markedly different from anything else "out there", I committed to writing them down and sharing them with the world at large that others in my position might not have to craft something entirely from scratch in order to express and understand their faith. Likewise, they merely are my own beliefs, and nothing more than that - whether others should find them useful in their own lives or not, I cannot say, only that this is what "worked" here for me.
Download: epub mobi (Kindle) pdf more Online Reader
lrf pdb txt
Price: Free! USD
Add to Library
Create Widget
Tags: god religion faith beliefs divinity new faith new religion science and god simulation hypothesis scientific religion
About Richard T. Adams II

Born just outside of our nation's capital in Falls Church, Virginia in 1983, Richard has always been told he possesses a considerable gift for writing. Having always found immense intrigue with assorted religious ideas and exploring them thusly, over the past several years worth of time he arrived at a set of relatively unique religious beliefs that fit his own personal beliefs and worldview about life. Choosing to commit himself to applying said talents toward those very ends by delving into such an unusual perspective regarding the shape his own personal faith ultimately evolved.to become, it's precisely this endeavor which he finds himself working toward completing just now! Facing many a considerable health problem that have plagued him since his early childhood, Richard has turned to his writing primarily as a means of escapism from the grim realities of his own personal life.

Furthermore, as an avid fan of countless many supernaturally based horror, thriller and sci-fi works (coming in any number of different mediums - from the written word onward to films, television and video games), Richard has also found himself writing the occasional piece of fiction on top of his various non-fiction based works - whether in short story form, or else as full blown novels! An as of yet unfinished novel about the original horror film aficionado, Tod Browning, is still in the process of its very earliest of stages, whilst a full length fantasy novel about Jesus Christ's most infamous apostle, entitled The Reckoning of Judas Iscariot, is just now nearing its own completion here today!

About the Series: The TekARK Trilogy

TekARK offers an alternative idea on religion shaped primarily by the modern world. Aided by scientific theory and fact, it draws on the notion of the divine with the idea of the Simulation Hypothesis. At the same time, it also holds that all ancient major religions are in fact real and true, having come from the same divinity in order to spark differentiation in our world. We explore the notion that advanced technology and ideas are indistinguishable from literal "magic"; leading to the belief that ours is a simulated reality and just what that might mean for us all.

This work is primarily intended for those who have been searching for their own faith, yet have always come up empty thus far; those of a realist/scientific bent who seek to explore their own faith; or merely the inquisitive sort who are perfectly content in their beliefs, but always seeking to continue expanding their horizons with new ideas. TekARK sprung out of my own beliefs when I found no existing religion adhered to exactly what I came to see of this world. I committed to this process of sharing them with the world, that others might not have to start entirely from scratch to understand their own faith.

Also in Series: The TekARK Trilogy

You have subscribed to alerts for Richard T. Adams II.

Would you like to favorite Richard T. Adams II?

You have been added to Richard T. Adams II's favorite list.