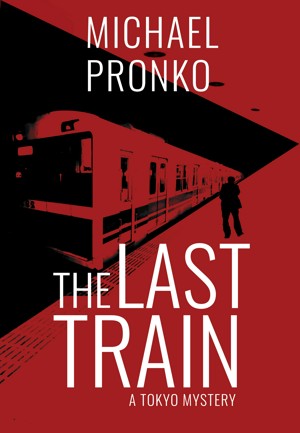 In this Tokyo thriller, Detective Hiroshi Shimizu, a specialist in what collar crime, is pulled out to the scene of grisly murder--a murder by train. Hiroshi teams up with ex-sumo wrestler Sakaguchi to scour Tokyo’s hostess clubs, sacred temples, and skyscraper offices to find an elusive killer before she extracts her final revenge—which just might be him. More
Winner 2018 Shelf Unbound Best Independently Published Book
Winner 2017 Book Excellence Awards Best Mystery
Solo Medalist Winner 2017 New Apple Awards for Excellence

Detective Hiroshi Shimizu investigates white collar crime in Tokyo. When an American businessman turns up dead, his mentor Takamatsu calls him out to the site of a grisly murder. A glimpse from a security camera video suggests the killer might be a woman. Hiroshi quickly learns how close homicide and suicide can appear in a city full of high-speed trains just a step—or a push—away.

Takamatsu drags Hiroshi out to the hostess clubs and skyscraper offices of Tokyo in search of the killer. Hiroshi goes deeper and deeper into Tokyo’s intricate, perilous market for buying and selling the most expensive land in the world. He teams up with ex-sumo wrestler Sakaguchi to scour Tokyo’s sacred temples, corporate offices and industrial wastelands to find out why one woman was driven to murder.

After years in America and lost in neat, clean spreadsheets, Hiroshi confronts the stark realities of the biggest city in the world, where inside information can travel in a flash from the insiders at top investment firms to street-level punks and teenage hostesses, everyone scrambling for their cut of Tokyo’s lucrative land deals.

Hiroshi’s determined to cut through Japan’s ambiguities—and dangers—to find the murdering ex-hostess before she extracts her final revenge—which just might be him.