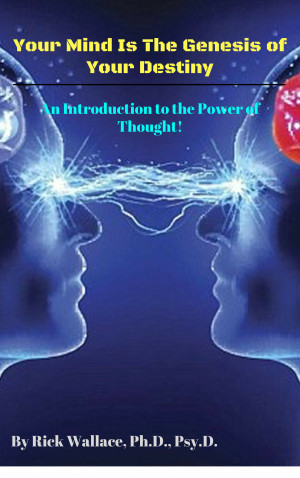 Your Mind is the Genesis of Your Destiny: An Introduction to the Power of Thought

Born in the late 60’s to a fifteen-year-old mother and an absent father, I was taken in at the age of nine months by my great grandparents. They adopted me when I was two.

I was precocious as a child and I’m sure my grandmother would add, quite loquacious. My grandmother took advantage of my inherent ability to learn and my inexorable desire to talk. She sat me down at the age of two, switch in hand, and began to teach me the story of the creation as revealed in Geneses 1-3. Once I had it committed to memory, my grandmother taught me to recite it with passion. She then took me from church to church, put a microphone in my hand and made me recite it before the congregation.

My grandmother said she was being obedient to the prompting of the Holy Spirit in teaching me the Bible, thank God she did.

My grandfather was the one who taught me how to be a man. Born in 1909, he had to stop schooling in the second grade to help his parents who sharecropped. Because of this he stressed education and achievement. Though he passed away at the age of 83 in 1992, he is still very much with me. My grandmother passed recently, in March 2010 at the age of 92.

I am a proud father of seven ranging in age from 2 to 31. I consider each one a blessing from God. You will be introduced to each one individually through my writings. My children are a constant reminder of how much God loves me.

Thanks to my grandparents, I had a wonderful childhood. I was given an immense appreciation for scholarship and carried the natural gift of athleticism. Throughout school, I put both to use.

I have been blessed both in athletic achievement and in the attainment of academic knowledge. Both have contributed to my advancement in life.

I feel it necessary to give honorable mention to four people who had an enormous impact on my life. Ms. Geraldine François, my 4th-6th grade teacher. Ms. François was an accelerated learning teacher who saw something special in me and refused to accept anything less than my best. This included my handwriting. She said no one would ever discern the depth of my intelligence if they were not able to decipher my handwriting. To this day, my handwriting is identical to hers and most women find it humorously unbefitting a man.

Mr. Brewer was my seventh grade history teacher. He instilled the intrinsic value of self-discipline. Mr. Brewer was a former college instructor who discovered that many college students, especially those of color were unprepared to take on the transition to a less restricted learning environment. He decided to resign his position and teach and prepare younger students at the seventh grade level. Thanks to Mr. Brewer, I found that regardless to ability, one who lacks self-discipline would be overcome by failure. He insisted that obedience, punctuality, diligence and patience were all keys to success.

Ms. Williams-Leonard, my high school journalism instructor, took an interest in me. She was married to one of my football coaches. She knew that my biological father was not a part of my life and suggested that as a way of dealing with the situation, I should write an article on absentee fathers. I wrote the article entitled The Invisible Father. Ms. Leonard was instrumental in getting the article published in several publications including one national publication (Teen Magazine). That article eventually inspired my first book, “The Invisible Father : Reversing The Curse of A Fatherless Generation”, written during my incarceration.

Lastly, Ms Dewberry, my eleventh grade English teacher. Ms. Dewberry had the reputation for being the toughest teacher at the school. Students would literally cry when they received their schedules and found that they would have Ms. Dewberry. I took it as a challenge. Within the first week Ms. Dewberry noticed something within me worth cultivating. As Ms. François, she pushed me. I remember a specific conversation in which she said, “Rodrick you possess that something special, that intangible asset that will allow you to soar beyond the clouds, you are a young black man with limitless potential. Don’t ever allow anyone to tell you that you can’t. The words “you are not good enough “ will never apply to you. Whatever your mind conceives, you will achieve.” I took that to heart. I have been successful, in sports, school, and business. by the grace of God, I have only scratched the surface.

There are many more past accomplishments and achievements, however my focus is forward. Just as the Apostle Paul, I no longer look behind, but I look ahead.

I founded The Odyssey Project and 100 Men of Purpose because there seemed to me to be an ever-widening gulf between the church and those in need of the power and guidance of the numerous ministries within the church. I decided to invest my energy into meeting people at their point of need regardless to religious affiliation, or the lack thereof. Not only has my commitment allowed me to walk in purpose and power, I have witnessed men who have been written off by friends, family members, and society in general, are learning to walk in their destiny as protectors, leaders and spiritual coverings for their communities with a fervency and unparalleled passion. There is a revival brewing on the horizon.

100 Men of Purpose is special to me. The concept comes from the great revivalist, John Wesley. Wesley once said, “Give me 100 men who fear nothing but God and hate nothing but sin and we will change the world.” Wesley went on to ignite the Methodist movement, the greatest revival of his time. I’m looking for men who fear nothing or no one who are willing to walk in purpose.

You have subscribed to alerts for Rick Wallace Ph.D, Psy.D..

Would you like to favorite Rick Wallace Ph.D, Psy.D.?

You have been added to Rick Wallace Ph.D, Psy.D.'s favorite list.