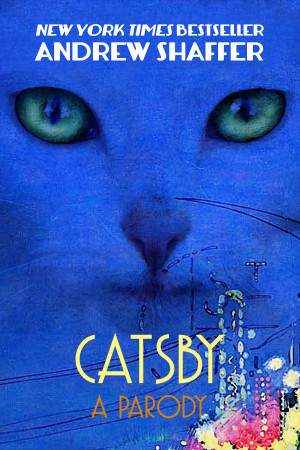 As Dick soon learns, the truth is far stranger. Catsby is a “furry” who spends his days and nights in a cat costume, pining away for Dick’s cousin Dandelion, a manic-pixie Brooklynite with a brutish husband. Will Catsby’s romantic obsession cost him all nine of his lives?

“The funniest take on a bestseller since Harvard Lampoon’s Bored of the Rings.” — CNBC on Shaffer's Fifty Shades of Grey parody, "Fifty Shames of Earl Grey"

Andrew Shaffer is the New York Times bestselling author of the essential survival guide, How to Survive a Sharknado and Other Unnatural Disasters, and the Goodreads Choice semifinalist Fifty Shames of Earl Grey.

He has appeared as a guest on FOX News, CBS, and NPR, and has been published in Mental Floss, The Philosophers' Magazine, and Maxim. He has professionally reviewed romance, erotica, and women's fiction for RT Book Reviews magazine.

He writes in multiple genres, including humor, science fiction, horror, and literary nonfiction.

Shaffer attended the Iowa Writers’ Workshop for a summer semester and studied comedy writing at Chicago's The Second City. An Iowa native, Shaffer lives in the Pacific Northwest with his wife, novelist Tiffany Reisz.

He is the owner and creative director of Order of St. Nick, the greeting card company whose cards have been featured on The Colbert Report.

Such a funny read! Literally laughed out loud at so many parts. Andrew Shaffer's novels are a 'must have' within my book collection

You have subscribed to alerts for Andrew Shaffer.

You have been added to Andrew Shaffer's favorite list.

You can also sign-up to receive email notifications whenever Andrew Shaffer releases a new book.