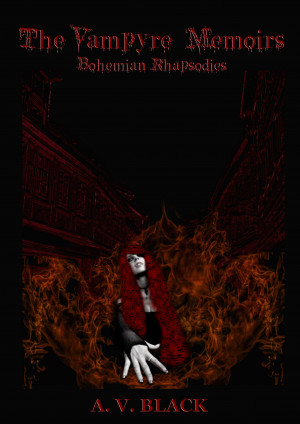 Bohemian Rhapsodies is narrated by one of the siblings, Layla Amentson.
Once upon a time, a small German town was infested by two large mysterious fires, diminishing the town almost completely.
How were the fires truly sparked?
Layla’s paths crossed with an obscure abbot imposing a deathly threat not only to vampyres but also to humans.
Can the oldest vampyres be killed?
The siblings set out in Bohemian London on their quest to find the mischievous culprit hiding his sinister tampering in the small German town he put under his spell.
Available ebook formats: epub
Price: $5.49 USD
Buy Add to Library Give as a Gift
How gifting works
Create Widget
Tags: vampires vampire fantasy magic sciencefiction vampyre magic book magic books vampyres sciencefantasy
About A. V. Black
Read A. V. Black's Smashwords Interview
Learn more about A. V. Black

Reviews of The Vampyre Memoirs - Bohemian Rhapsodies by A. V. Black

You have subscribed to Smashwords Alerts new release notifications for A. V. Black.

You have been added to A. V. Black's favorite list.

You can also sign-up to receive email notifications whenever A. V. Black releases a new book.