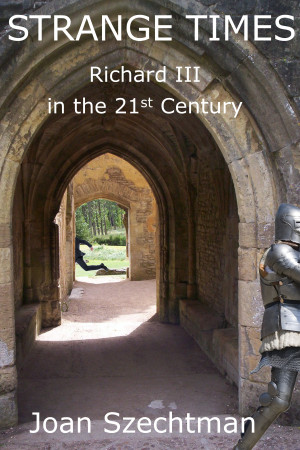 By Joan Szechtman
Haunted by the legend Lord Francis Lovell starved to death while trapped in an underground vault, Richard risks his future to save his dearest friend. More
"The Cat, the Rat and Lovel our Dog
"Doe rule all England under a Hog"—William Colyngbourne
The rat, Richard Ratcliffe died, and the cat, William Catesby was executed after Richard III, a hog lost his battle against Henry Tudor at Redemore in 1485. Francis Lovell, our dog, survived. Two years later, Lovell led the rebels at the Battle of Stoke Field, which they lost to King Henry VII.
"Anything that can go wrong, will go wrong."—Murphy’s Law
While many of the rebels were killed in battle, or executed after, Lovell’s fate is unknown. Richard is haunted by the possibility Lovell starved to death after being trapped in an underground vault. Richard uses the time machine to go to the vault. Then everything goes wrong.
Available ebook formats: epub mobi lrf pdb
First 20% Sample: epub mobi (Kindle) lrf more
pdb
Price: $2.99 USD
Buy Add to Library Give as a Gift
How gifting works
Create Widget
Tags: time travel richard iii 21st century fifteenth century battle of stoke fifteenth century trial francis lovell
About Joan Szechtman

Reviews of Strange Times: Richard III in the 21st Century--Book 3 by Joan Szechtman