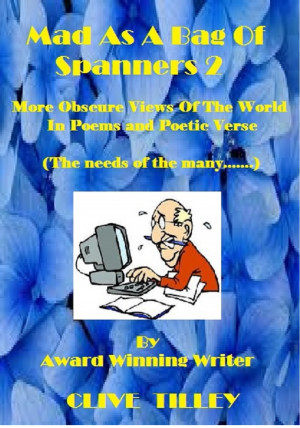 Mad As A Bag Of Spanners Book 2

Had my 64th birthday just recently, seems I'm not so young anymore.
My life so far has been eventful to say the least, but that is another book of stories.
Married and divorced twice I now live alone. Don't get me wrong I loved being married and both my ex wives have a huge part in my heart even today. My bad I couldn't hang on to them, don't hold grudges, life's too short. I was told I was a great father but no so good as a husband, fair comment I think. I have 3 children and I am so proud to be their father..
I embrace all cultures, I worked abroad for many years and had to work alongside a huge variety of races and religions, I found them all a great bunch of guys. Ultimately though I'm proud to be English.
When I was 13 went to France for the first time, that started a lifelong love of everything French. Especially the wine.
I lived in Europe for a many years. Working in vineyards, building oil rigs, selling wine across Europe.
One day I was introduced to a young Polish girl, it was love at first sight, at least for me. When she returned to Poland I followed her. We were married and she presented me with the greatest gift and the strongest love I've ever known, my son Hubert. While I love my son and daughter from my first marriage, having a new life to care for when in my mid 40's was so so rewarding. I have no regrets thus far, well perhaps I could have been a better husband and lover. All in all probably the best years of my life
My children often said that I tell a good story and that I should write them down. So, that's what I've started doing.
I hope you enjoy reading some of my works and that perhaps I can raise a smile or two.

I've not had any formal writing experience so I hope that you will forgive the simplistic style.

What do I like ? Well I'm a fan of all Star wars films and I've followed Star Trek from the beginning. Still watching repeats even this morning. My phone is still an old, flick open, Samsung we call "Beam me up Scotty". My son thinks I'm loony.

I love new technology. I want to live long enough to see robots walking the streets. To see a manned base on the moon. To watch men walking on Mars.

Favourite T.V. program ? Has to be. House, Death in Paradise and Big Bang Theory at the moment.

Lt, Gen. H. Moore: We were Soldiers once, and young. & We are Soldiers still. READ it you won't be disappointed.

James Herriot: Vets books. That's the country boy in me.

Jane Goodall: In the Shadow of man. I cried when I first read this book. Little is told of the work of Jane Goodhall.
Desmond Morris. The Naked Ape

Karl Pilkington: The Moaning of Life. He's a crazy loon and SO funny.

Douglas Adams. Hitch hikers guide to the galaxy. I watched a play at a local theatre when I was a schoolboy. Scared the bejeebers out of me.

Gerald Durrell. If you have a love of the wildlife on this planet you should read these books.

Isaac Asimov. The early books. What can I say, his books directed my early life, opened my mind to the possibilities of the future.

BEST FILMS. We were Soldiers once and young. Battle of Midway. Hamburger Hill. The Founding of a Nation. Zulu. Zulu Dawn. Wrath of Khan. Days of Glory. Saving Private Ryan.

About the Series: Mad as a Bag of Spanners Books 1 & 2

An often humorous and lighthearted view of the world as I see it.

The books are written covering a variety of subjects including Love, Family, Life, Seasons, The World etc

Although the books are written for ages 12 plus, there should be nothing to offend anyone.

The books contains no swear words, no gratuitous violence or horror and no explicit sexual references.

While many of the poems will make children laugh there are some pieces are marked 14+ due to perceived innuendo, and I would advise adults to decide if they suitable for younger children.

The book is filled with pictures and photos, both colour and black and white, to illustrate the works.

Books size is A5 and has a stiff glossy cover.

You have subscribed to alerts for Clive. R. Tilley.

You have been added to Clive. R. Tilley's favorite list.

You can also sign-up to receive email notifications whenever Clive. R. Tilley releases a new book.