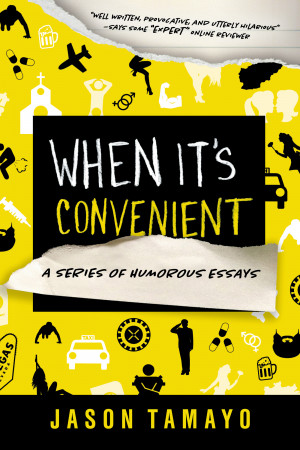 When it's Convenient: A Series of Humorous Essays

When it’s Convenient is a series of humorous essays about meaningless sex, pathetically unhealthy relationships, and some hilariously unusual circumstances from the perspective of one of the Internet’s boldest writers. Laugh-out-loud as the author takes you on his hedonistic journey that includes a short stint at a mental institution, a candid interview with a seasoned prostitute, and a slew of other bizarre situations that only he could find his way into … and out of!

Jason Tamayo is an American author, humorist, and blogger. He grew up in Brooklyn, NY, and attended LaSalle Academy high school where in his own words: &quot;They never taught me anything about evolution.&quot; Upon graduation, Jason joined the United States Navy Reserve, becoming both a medical corpsman and a veteran of the War in Afghanistan.

After gaining discipline from his time in service, Jason returned to school and attained a BA in Business Management and a minor in English Literature from Baruch College. He also went to New York Film Academy and completed the Screenwriters workshop.

You have subscribed to alerts for Jason Tamayo.

You have been added to Jason Tamayo's favorite list.

You can also sign-up to receive email notifications whenever Jason Tamayo releases a new book.