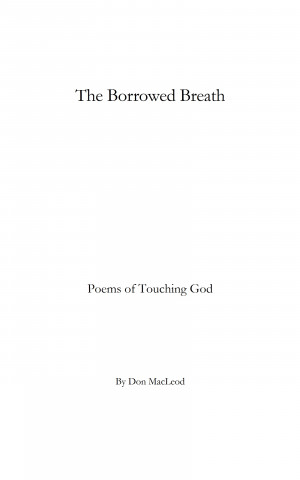 Most of these poems are based on the deep desire to know God.  Since I was a child, I was awakened to the knowledge that there was more to this world than what most people see. Though there is no way, in truth, to explain or describe that transcendent place or the connection when it happens, this is my attempt to put that experience of the longing and the connecting into words.

We have removed God to Heaven.  We have pushed God to only be experienced after death. So why would we experience God here and now? From what I have seen and experienced, God is not far away.  God is so close that you won't believe it. We are taught God is omnipresent, but I find that most people don't appear to believe it or live like it. What most people practice and act like, is that God is in Heaven. When you die, you will see God, is what people actually believe. No, if God is omnipresent, God is here NOW. Right? So we don't have to die to see, feel, touch, experience or be with God. Believe and think what you want, but I am telling you, God is much closer than you think. Some of these poems are an attempt to describe those moments.

There are also poems about connecting to others and the challenges and growth that brings.  The most we can do as a human is try to be vulnerable and connect heart to heart. We are taught not to expose ourselves that way, because you will pay for it socially. People will be mean. They will. Time to change that. It is time for us to allow each other to be tender and not immediately smash the other person for it. We don't have to toughen up for the cruel world, we have to change the cruel world. That means WE have to change.

Don MacLeod was born on the coast of North Carolina in ancient times. He was dragged about the South by his parents ending up in mountains of North Carolina. He tried college and felt like they weren't teaching what he wanted to know there, so he left. During his adventures, he was kidnapped by a Viking Queen and taken off to the frozen tundra of Minnesota for decades. He did marry her happily and lived with her until her death from ovarian cancer in 2012.

During her illness, he started informing people through emails of her journey through treatment and then remission. When she went into remission, he missed writing the updates and after several author friends encourage him to write, he decided to work on a novel that had floated around in his head for 20 years. In the process, poems started coming out much to his chagrin. Not his forte at all. He resisted while working on multiple novels, but they kept coming out. When his wife died, more came out over the years until he finally realized there were enough for a book. "The Borrowed Breath" was published and he then found an old poem that he did not remember and decided to look through old writings and found 20 more that were forgotten as well. In that time of looking and after "The Borrowed Breath" went to press, many more had come out and now "Wait in the Stillness" will soon be published as well. Hopefully novels and short stories will follow soon too.

You have subscribed to alerts for Don MacLeod.

You have been added to Don MacLeod's favorite list.

You can also sign-up to receive email notifications whenever Don MacLeod releases a new book.