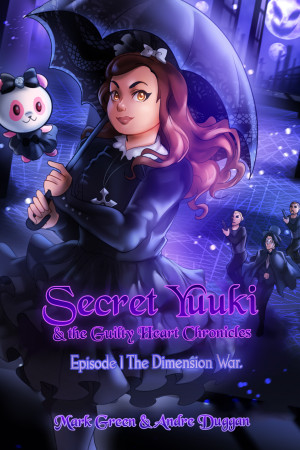 By NexusDarkworld Productions
Book 1 of the Dimension Wars by Andre Duggan and Mark Green. The dimensional traveller Secret_Yuuki visits the Silver Kingdom but later falls in love with Prince Burien after an explosive first meeting, but what are the consequences when the King goes against their romance? An epic tale that combines fantasy and magic with sci-fi, brace yourself for an amazing story.

Mark Green, a fantasy and horror author, born in Brighton, England. Although only in his late twenties, has published a large number of novels, short stories, comics, and is set in the future to voice act for two game series. He first took an interest in writing after his first national BBC appearance when he was eleven years old for his poetry, as a teenager he wrote fan-fiction for fun, but it wasn't until after leaving college and working long hours in retail that he began writing his first professional fantasy novel, Grey Faction, which took nearly three years to finish and publish. Since then, Mark was gone on book tours around the UK and USA. His book releases currently include; Grey Faction, The Scalpel Murder, Riverside Mystery, Detective Michael, Thirteenth Retribution, Melodies of a Madman, Jinhai's Justice, Rescue Reina, New Nakama, Saving Sebastian, Nexus Comics, Grey Faction Comics, Vampire Attack: Empire of Shadows, and with many more to come.
Follow the author via the following:

You have subscribed to alerts for NexusDarkworld Productions.

You can also sign-up to receive email notifications whenever NexusDarkworld Productions releases a new book.