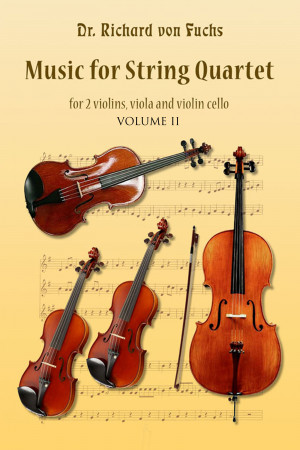 By Richard von Fuchs
12 string quartets, many based on music stemming from folk songs, and 6 are arrangements of compositions for piano. More
These are 12 string quartets. Many are arrangements of piano pieces of Bach, Debussy, Grieg, and Mendelssohn. Two are entirely original. Many relate to folk music, or to the late 19th century. Individual parts are included for ease of playing.

Dr. Richard von Fuchs was born in St. Louis, grew up in Niagara Falls, New York. He graduated from the University of Colorado and the University of Rhode Island, and much later from the University of Vienna. After teaching high school in Rhode Island and Ontario, he settled on Vancouver Island in 1971. The BC NDP (social democrats) hired him as an organizer and he became a Canadian citizen.
He had walk-on parts as a fisherman, tree planter, a radio and TV news announcer, including CBC Prince Rupert, retail music store owner and piano tuner. The habit of door knocking in political campaigns led to several years as a door to door salesman.
He trod the boards in amateur theatre and musicals in Courtenay, B.C in the 1970s, and then sang in some Folk Festivals and isolated bars. Twice went to Japan to teach English.
His former wife, Betty, took excellent care of him.

In 1990 he moved to Western Hungary to teach English at a forestry college and earned a PhD at the University of Vienna. Abandoning 33 years of atheism, he returned to the Lutheran church, and became a church janitor in Scarsdale, New York for 18 months, while teaching at Iona College. He was a Green party candidate in Ontario in 2OO3.
Returning to Europe, he was employed at the University of West Hungary until 2014, settled in a bourgeois suburb of Sopron, Hungary. He has a Hungarian wife, Etelka, and a son Maximilian, born in 1996.

You have subscribed to alerts for Richard von Fuchs.

You have been added to Richard von Fuchs's favorite list.

You can also sign-up to receive email notifications whenever Richard von Fuchs releases a new book.