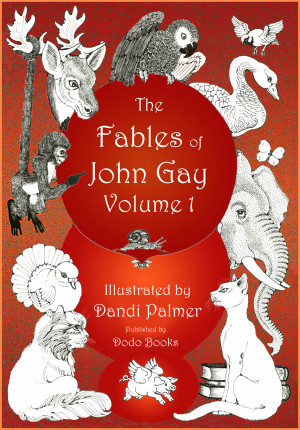 The Fables of John Gay, Volume One

By John Gay
Poems by the writer of The Beggar's Opera. John Gay had a humorously sardonic view of human nature. From three centuries ago, his Fables show that nothing changes. All life is here - charlatans, doxies, thugs, misers, the self-deluded, the gossips, the opportunist politicians ... and many animals who know better.

Fully illustrated with line drawings by Dandi Palmer. More
John Gay was an English playwright and poet who is most famous for his satirical masterpiece The Beggar s Opera. Originally employed in the government, Gay turned to writing after losing his position following the death of Queen Anne in 1714. From then on, Gay relied on his income from writing, building up a long list of patrons over the course of his career, and making contact with some of the most famous writers of the time, including Jonathan Swift and Alexander Pope (and with whom he was a member of the informal society of authors and thinkers known as the Scriblerus Club). After losing the majority of his fortune to a bad investment, Gay eventually found his greatest success in The Beggar s Opera, a ballad opera that satirized society and government, and which ran for sixty-two nights upon its initial release. Gay died on December 4, 1732, at the age of forty-seven, and is buried in Westminster Abbey.

John Gay wrote a tragedy called 'The Captives', which was performed at Drury lane in January 1724. The Author also read it to the Princess of Wales. Impressed, she asked him to write some fables for her infant son, the Duke of Cumberland. In 1727, after some delay in the preparation of the illustrations and plates by John Wootton the animal painter and Kent, the architect, Tonson and Watts published Volume 1 of the Fables. The most noted edition of the Fables, with wood engravings by Thomas Bewick, appeared in 1779. Gay is now principally known as the author of 'The Beggar's Opera'. For some time his Fables had been just as popular, especially with the Victorians.
Gay completed a second volume of Fables in the year of his death in 1732 and they appeared in 1733. These poems are much longer and 'mostly on subjects of a graver and more political turn’.
John Gay was born in Barnstaple, Devon, and baptised on 16th, September 1685. He was the youngest child of William Gay and Katherine Hanmer. They also had an older son and two daughters, another daughter dying shortly before John's birth. The family were descended from the Le Gays of Oxford and Devonshire and, although not wealthy, were comfortably off. Gay's mother died in 1694 when he was only ten. His father died the next year. One of four paternal uncles took charge of the orphaned family. The elder brother, Jonathan, joined the army and rose to captain before dying in 1709 at the age of 31, and the two sisters, Catherine and Joanna, married.
After a grammar school education John Gay was apprenticed to a silk mercer in London. He gave up the vocation, or was dismissed, and returned to Barnstaple. He stayed with his mother's brother, the Rev. John Hanmer, a nonconformist minister, before returning to London. Some poems discovered in the minister’s favourite chair a century later were attributed to Gay. Authorship is not certain and these seem to be the only work from that period of his youth. Though in London for some while, little is known about how Gay survived until the publication of his poem 'Wine' in 1703. The poet’s friendly and compliant nature later earned for him such friends as Alexander Pope, Jonathan Swift and Dr. John Arbuthnot.
In 1712 Gay obtained the post of secretary to the Duchess of Monmouth, wife of Charles II's illegitimate son who had been beheaded for trying to overthrow James II. This eccentric and difficult employer dispensed with his services in 1714. In the middle of the year, owing to the influence of his friends, Gay was appointed secretary to Lord Clarendon who was about to visit the Court of Hanover. On payment of £100, Gay promptly used it to buy a sumptuous outfit to impress the German court. On the 1st, August Queen Anne died and Lord Clarendon and his secretary were recalled. Gay was once again left without a patron or employer.
From then on Gay willingly gave up his independence to become the protégé of anyone indulgent enough to support his indolent habits and liking for good food and wine.
By his own admission, Gay was fat and disliked exercise. It was probably the combination of the two that hastened his comparatively early death. Sooner than walk a short distance, he always made sure a coach was at his disposal when in London.
Gay could not cope wisely with penury or the sudden acquisition of wealth. Against all good advice, he invested the considerable fortune of £20,000 in South Sea stock. He lost it all when the bubble burst in 1720. Then came the success of his play, 'The Beggar's Opera' with music by Johann Pepusch. It was staged by John Rich at Lincoln's Inn Fields in 1723.
Its profits enabled Rich to build the first theatre in Covent Garden. Though not well remunerated, John Gay became famous, as well as notorious with those who claimed the play was immoral. The real profit came from 'Polly', its sequel. The Lord Chamberlain, under instruction from Sir Robert Walpole, prohibited its performance. As a consequence, printed copies of the text sold at a phenomenal rate. Given Gay's easy and eager to please nature, it is unlikely he courted infamy of any description. Even the scandalous play 'Three Hours After Marriage', though attributed to him, was jointly written by Pope and Arbuthnot as well.
Gay was able to use language in a fluid and natural way all levels of society understood. Many of his moral stands did vary in height, although he does consistently declare his abhorrence of butchers.
In 1723, Gay's health deteriorated severely. With the attention of Dr. Arbuthnot and the Duke and Duchess of Queensbury, his last patrons, he survived.
Gay died in 1732 at the town house in Burlington Gardens of the Duke and Duchess. According to Dr. Arbuthnot 'of an inflammation and I believe at last a mortification of the bowels.'
Due to the management of Gay's money by the Duke of Queensbury, the poet left £6,000. As Gay made no will and never married, the money and the proceeds from a theatrical benefit went to his widowed sisters, Catherine Baller and Joanna Fortescue.
The Duke and Duchess of Queensbury had a memorial erected to John Gay in Westminster Abbey where he was buried. It was in Poet's Corner until 1936 when it was removed with some others after the discovery of two medieval paintings of St. Christopher and St. Thomas behind the wall they stood against. It is now in the Triforium, unfortunately out of the public view.

Alexander Pope's lines on the monument give an idea of Gay's character from someone who knew him well:-

Of Manners gentle, of Affections mild;
In Wit a Man; Simplicity a child:
With native Humour temp'ring virtuous Rage,
Form'd to delight at once and lash the Age:
Above Temptation, in a low Estate,
And uncorrupted, ev'n among the Great;
A safe Companion, and an easy Friend,
Unblam'd thro' Life, lamented in thy End.
These are thy Honours: not that here thy Bust.
Is mix'd with Heroes, or with Kings thy Dust;
But the Worthy and the Good shall say,
Striking their pensive bosoms _ Here lies GAY.

Gay's two line epitaph to himself probably says more about the poet and playwright:-

Life is a jest; and all things show it,
I thought so once: but now I know it.

You have subscribed to alerts for John Gay.

You have been added to John Gay's favorite list.

You can also sign-up to receive email notifications whenever John Gay releases a new book.