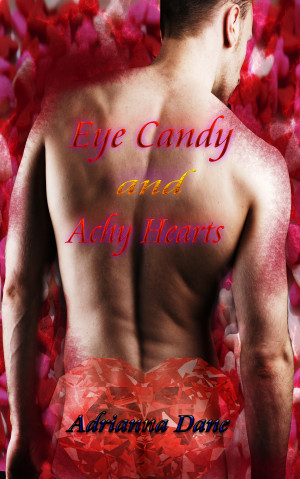 Online dating fantasies can sometimes erupt into real-life sexual encounters and multi-faceted romances between two very different men. Will it this time?... More
Love and romance have eluded Jeffrey all his life. He still lives in his mother’s house, he hates his job as an accountant, and he’s never been in love. In desperation, he signs up as AchyHeart1945 for an online dating site. For three months, he enjoys late-night exchanges with a man using the screen name EyeCandy2933. What began as a way to ease Jeffrey’s aching, lonely heart erupts into a real-life sexual encounter when, on a whim, he invites his younger friend to join him in a one-night-only, no-string-attached, steamy hook-up. And EyeCandy2933 accepts.

But online fantasies can easily devolve into disappointment when confronted with reality. Will that be the case on this Valentine’s Day? Jeffrey has finally reached a point when he has to take a chance or go out of his mind. But when AchyHeart1945 finally meets EyeCandy2933, everything changes. For good or for bad is yet to be determined. Jeffrey may discover that love and romance at any age can be an amazing thing.
Available ebook formats: epub mobi pdf lrf pdb html
First 20% Sample: epub mobi (Kindle) lrf more Online Reader
pdb
Price: $0.99 USD
Buy Add to Library Give as a Gift
How gifting works
Create Widget
Tags: glbt erotic romance mm valentines day gay romance contemporary romance holiday romance
About Adrianna Dane

Adrianna Dane has been putting pen to paper since the age of ten. She currently resides in the state of Washington. She has a great fondness for using a fountain pen when writing her first drafts. Hobby interests are varied, including photography and traveling.

The first defining love story Adrianna read back in junior high school was "Wuthering Heights" by Emily Bronte, and that set her on the road to her long-standing love affair with books of all genres. Her inspiration in writing often can be found by listening to song lyrics, from hard rock to classical, and reading poetry by such poets as Elizabeth Barrett Browning, Edgar Allen Poe, and Ranier Maria Rilke. But finding inspiration for her stories truly has no boundaries for Adrianna.

In 2006, her dark fantasy GLBT story, Body Parts, won its category in the Dream Realm Awards. Adrianna has written more than 100 stories, short, novella, and novel length, delving into many facets of the human condition - contemporary, futuristic, and fantasy, and all the flavors therein and in between. In other words, wherever the story and the characters, as well as their intricate stories, take her imagination, then her pen and/or computer keyboard, are sure to follow.

You have subscribed to alerts for Adrianna Dane.

You have been added to Adrianna Dane's favorite list.

You can also sign-up to receive email notifications whenever Adrianna Dane releases a new book.