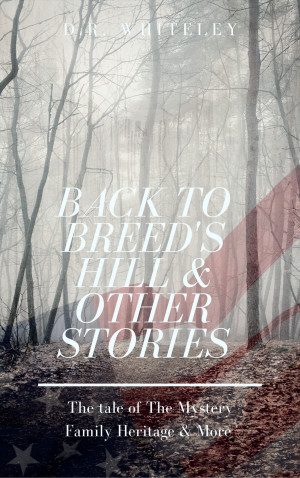 Back to Breed's Hill & Other Stories

You travel to a historical landmark In Boston Mass to discover more hidden secrets you never even heard of, but to find out more you have to go to every single place. Starting at the beginning of the Boston Freedom Trail, where everything first started then ends your journey with the answers with what you asked yourself. More
What if you knew you were part of something great, but you have no idea that you were right about what you were feeling. Would you do anything in your power to find out the truth about your ancestry? So get to the bottom of what you were asking yourself. You take the matters into your own hands and decide to send a DNA sample to the ancestry to finally find out if you were right. Then get a letter back from the ancestry telling you that you belong to a special historical family.

You travel to a historical landmark In Boston Mass to discover more hidden secrets you never even heard of, but to find out more you have to go to every single place. Starting at the beginning of the Boston Freedom Trail, where everything first started then ends your journey with the answers with what you asked yourself. Hopefully that there won’t be any more questions that need to be answered unless you find something else that you have never seen before.
Available ebook formats: epub mobi pdf pdb html
First 20% Sample: epub mobi (Kindle) pdb Online Reader
Price: $3.00 USD
Buy Add to Library Give as a Gift
How gifting works
Create Widget
Tags: fiction adventure history fantasy entertainment rome italy ebook fiction history italy reality entertainment
About D.R Whiteley

I am a Creative Writer, Director, and 1st Assistant Director, who spends her time seeking creative inspirations from watching films and reading graphic novels.

As I got older, I put off pursuing my dream and started to pursue my other dream. I wanted to pursue being a professional basketball player, but a career-ending injury changed everything. I started to think about starting back up with writing my own book.

Later I found new inspiration from a very known television show that got me to change my mind about wanting to start writing again. So, I started to write my own stories, but they didn’t seem to sound right to me. Then I started to research colleges to see which school would be the right school for me.

Then enrolled in creative writing for entertainment B.F.A program at Full Sail University. With so many stories to write and tell, I am now set on a mission to learn how to tell my stories in the right format.

I have a strong interest in historical fiction, fantasy, drama, and action. I specialize in creating stories in different worlds. This will be my first time putting my characters in difficult circumstances and to have a “plan B” problem-solving back up if “plan A” doesn’t work out.

My latest project that I am working on called Champion of Rome, Daughter of Athena, which tells a tale of the Queen of the Amazons and Champion of Rome trying to figure out why her mother left her twenty-five years ago on a doorstep of strangers.

While working on her own projects, she has no problem helping others with their own problems with their stories. A year later I went on to get my M.F.A degree in film production, where I learned more about how to tell my stories and direct my own work.

I had my first directorial debut on a short film called Aphonic, which tells a story of a man who was the only person who heard a loud ringing sound.

Later, I was given an amazing opportunity to be a 1st assistant director in this past February on a short film called A Campfire Tale. I was able to help my director stay on schedule and manage eighty-one people on set. I was so grateful that I was given that chance to pursue in one of my dream jobs.

​When I am not working on writing my project, you can find me studying more on Ancient History or watching new films to get more inspirations for my stories. I have a perfect attendance award for the school. I can’t get my mind to write about anything else that doesn’t have to do with ancient mythology, but I do love challenges with new things.

You have subscribed to alerts for D.R Whiteley.

You have been added to D.R Whiteley's favorite list.

You can also sign-up to receive email notifications whenever D.R Whiteley releases a new book.