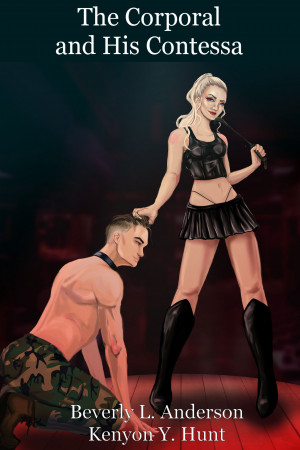 The Corporal and His Contessa

Charles received a medical discharge after an explosion that left him unable to perform his duties. Once home, he finds dealing with the PTSD more than he can handle, and with his friends' help, he finds his way into the St. Louis D/s scene. He needs a deep connection to his Domme, and ends up falling for a woman outside the Lifestyle. He makes the choice to ask her to help him, and he finds her willing to try.

Beverly L. Anderson started writing at the age of eleven, and when they did it was obvious they weren't going to stick to the every day. Her first story, written in a series of spiral notebooks, was about a kidnapping. There's no surprise that these days, they favor the dark corners of the psyche over the happy and fluffy parts. Enamored with the mind, she studied extensively in the subjects of psychology and related fields.

Beverly's other hobbies include gaming of all types, transgender and autism advocacy, and writing fanfiction. Their interest in the BDSM community began as simple curiosity, but has led her to the road to finding a place for herself there as a Domme. She herself has gone on the journey of self-discovery in the last few years, finally pinning down their identity after nearly thirty years of searching. Coming out as bigender, asexual, panromantic, and polyamorous was one of the hardest things they've ever done, but it gave them the confidence to become herself even more. An autistic person, and an eclectic pagan, Beverly finds themself at odds with a lot of what society calls "normal".

About the Series: Chains of Fate

Also in Series: Chains of Fate

Reviews of The Corporal and His Contessa by Beverly L. Anderson & Kenyon Y. Hunt

You have subscribed to alerts for Beverly L. Anderson.

You have been added to Beverly L. Anderson's favorite list.

You can also sign-up to receive email notifications whenever Beverly L. Anderson releases a new book.