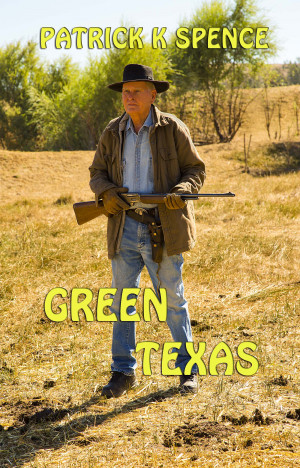 By Patrick Spence
Green Texas is an action Western that follows four ex-federal soldiers home from the Civil War leading seventy saddle horses. Crossing Arkansas and Oklahoma came run in from ruffians and Indians. In Texas they helped a fright hauler go against ruffians. Then months later three of them joined the Federal Marshal service going after men who stole money and goods from the government during the war. More
This novel opens late 1865, only months after the end of the Civil War, with the lead character Charles (Chas) Green locked in a horrific nightmare reliving a severe battle. It was mocking the last battle over Nashville, Tennessee near the end of the South’s Rebellion. At that time he was a Captain commanding a battery of cannons, now lead officer at the Union supply station in Memphis Tennessee.

The proceeding scenes, sets the pace for the novel and grows as Green and three close friends muster out from the supply station heading for Texas. The four were trailing seventy plus saddle horses to be sold or expand their herds at home. The stumbling rock at this time, only months after the end of the conflict gangs of unsavory ex-veterans from both sides, now called “Ruffians” were gathering together and raising HELL with the public.

Knowing that their path for Texas ran straight through the country festering with Ruffian. Where they did encountered several gropes of them, including marauding Indians wanting the same, horses. Their savior in each hostility was the amount of loaded pistols they carried next to them and a hard hitting seven rounds .58 caliber lever action Spencer carbine. This was a trick Green picked up years before going up against southern leaners in Missouri. As Quantrill, Todd and Bloody Anderson lead men fighting for the South. Where each packed at least ten or more loaded pistols, letting them out shoot a Union force caring only single shot muskets

In each encounter traveling across Arkansas and through Oklahoma their planed teamwork removed each threat. The large plus was at least one of them had passed through these lands and led the way trying the miss bad locations. If trouble arose the leader knew places to fight from.

Though at home Green and his close friend Al Cook who stayed beside him, use their skills to defend an Indian Village he had called home years before. This came from a new threat when Ruffians working for unscrupulous organizations using a new tool to displace legal land owners, new unpaid state land taxes.

The two’s rumbling when protecting these people, raised notice with the Texas Rangers and Union Army. Also the Federal Government needed agents to enforce federal law in their area. Their hand’s was placed on two’s shoulders, setting new direction as US Marshals and deputy Texas Rangers.

Their first major chore was protecting a Federal Land Surveyors from one of these gangs. Turning out that the company they were worked for had used their position during the war at a Union Supply Depot in Washing DC to seal guns and powder. Plus information they gained there to rob units delivering pay to the Union Troops fighting the Southern Rebels.

The novel comes to a closing as the two embraced one of the men that traveled home with them. Where the three dug out the leaders of this organization. But to arrests these men it took a path into Oklahoma, removing several ruffian gangs hired by them. Then chasing the leaders back to Texas, ending with a major shoot out in the streets Fort Worth at an Army Station. Just after three of the leaders were placed in their lockup, with the remainder of the gang trying to free them.

My motive to write novels were stimulated early from reading old paper back Zane Gray Westerns and Science fiction in the late fifties while working summers for the US Forest Service at remote locations in the Mountains through California. Where I quickly ran up the latter in two summers to Fire Crew Forman and held that position through high school. Then continued doing the same to help pay my years in collage.

Though it did not take long when following my career in engineering after graduation for my feelings for Fire Control to pull me back into the Forest Service. Then eight plus years of traveling to many locations in the states and long stays away from home became too much. I stepped out and started my own private engineering business, though several years later accepted an Engineering position in the US Forest Service. In this department I was hands on laying out new road locations and needed structures, gathering information for their designing, drawing plans, staking their locations and supervising Private Contractors constructing these projects for the next ten years.

Through at first writing novels held frustration, trying to untangle piles of papers while developing a story. My savior came in the early sixties when the computer arrived and shortly followed descent programs like Word Perfect and MS Word. This let my thoughts to be saved in folders as of now, where I could unscramble and expand them into novels. Then the big plus came when lap tops computers arriver and now the novels being worked on travel with me.

I must say a large plus came to me during my last ten years in the Forest Service when all timber and road projects had to have written summaries and environmental documents to be tested in the courts. So my winter months were filled doing these papers and gathering backup material to prove them. Also putting me in a Federal Judge’s chamber to get his stamp of approval.

These documents did help hone my ability to absorb information and placing my thoughts on paper. But writing a novel took a new reach. Though at this time my aim was towards western novels based on a Zane Gray style. So to give me more balance came night writing classes, plus reading action fiction written by noted authors like Tom Clancy, Robert Ludlum and John Grisham.

But it was not long for my style to change and soon my westerns followed the line of modern action novels. By basing them on the years just after the Civil War, that carried lawless uncertainties, along with bumping into Ruffians thinking only to do you harm. Though it did not take long for regular action fiction to absorb into half of my new novels.

Another good thing happened when I was able to take an early out from the Forest Service years back. This let my vision expanded as my wife and I pushed our photography into other subjects and like now we are still traveling through the states and different world countries. Also a laptop Computer travels with me, plus by passing through actual locations enabled me to wrap them into a novel, giving it more bases.

Now that E-Books have becoming popular, I am in the process of converting my stack of novels into this form. Also some light rewriting is being done before they make that jump. Of course the new ones coming off my computer will soon be added.

You have subscribed to alerts for Patrick Spence.

You have been added to Patrick Spence's favorite list.

You can also sign-up to receive email notifications whenever Patrick Spence releases a new book.