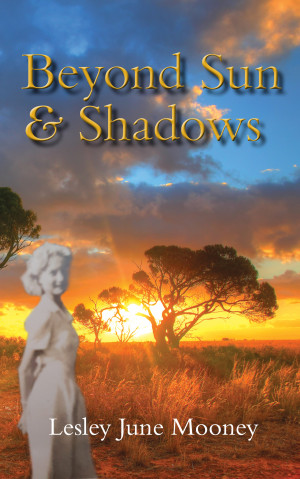 Beyond Sun and Shadows

Lesley June Mooney, (nee Hubbard) the author was born in Perth W.A. in the early thirties of mixed English/European blood- and educated at boarding Colleges there. When aged fifteen, with her father and brother, they travelled up North by train to Nullagine, then three days on a mail truck, Dad in the front and the two children out the back sitting on the stores; going to work at Roy Hill station, the first of three outback properties. After there on she enjoyed an interesting working life, a few weeks at Wyndham, nearly three years in Darwin and Sydney, then back to Perth. When over twenty one, she was asked to try Station cooking in Queensland, then cook for an elderly man helping the bush nurse, totally inexperienced.
Met husband Ernie, they married moving to Mackay, and her brother died in Perth. Worked beside Ernie in his various building trades and ran a Dairy until he became ill for two years. Then ran a Bull stud, had six children and leased a country Hotel for six years until back to the bull stud. Their only son died at twenty one and her father later.
As a Taurean, she is a creative lady - artist, dancer of all styles, pianist, singer, composer, writer & gardener and some travelling. Combined work in businesses until moving to a small acreage at Habana. After fourteen years of gardening, twenty of dancing, courses at U3A and TAFE, starting a tap group and theatre group for 45-70’s entertaining Seniors, she began to write. First 480 poems called ‘Fragments of The Mind’, then completed five novels, gaining experience on the internet. Ernie passed away and with a loving family to help she continues to write, hoping to be recognized with success in publishing while possible.

You have subscribed to alerts for Lesley J Mooney.

You have been added to Lesley J Mooney's favorite list.

You can also sign-up to receive email notifications whenever Lesley J Mooney releases a new book.