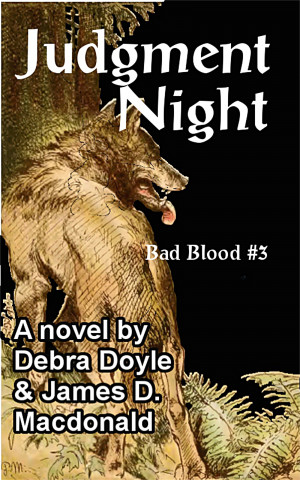 Haunted by strange, terrifying dreams, Valerie discovered an ancient force that lives in the mountains–and feeds on human fear. Like a werewolf, it has the power to change its shape. And Valerie has only one hope for destroying the evil that cries out for her soul–by facing her own darkest fears. More
The third book in the Bad Blood young-adult horror series by Debra Doyle and James D. Macdonald. Doyle and Macdonald are winners of the Mythopoeic Society Aslan Award for Young Adult Literature. They have published over thirty fantasy, science fiction, and horror novels for children, teens, and adults.
Available ebook formats: epub mobi pdf rtf lrf pdb txt html
First 15% Sample: epub mobi (Kindle) lrf more Online Reader
pdb
Price: $3.99 USD
Buy Add to Library Give as a Gift
How gifting works
Create Widget
Tags: novels horror dark fantasy novel werewolf werewolves doyle macdonald bad blood val sherwood
About James D. Macdonald

Dr. Debra Doyle attended University of Pennsylvania, where she received a PhD in English. She was expert in field-stripping semniotic weapons and disarming plot bombs.

James D. Macdonald attended the University of Rochester, where he learned that a degree in Medieval Studies wouldn’t fit him for anything. He went off to sea “to forget,” though he’s forgotten exactly what. As an enlisted Boatswain’s Mate in the Navy, and later as an officer, he saw the world, and discovered that three quarters of it was water.

Together they were nominated for the James Tiptree, Jr. Award and received the Mythopoeic Fantasy Award for Children’s Literature in 1992.

They were founding instructors of the Viable Paradise Writers Workshop.

For thirty years they lived in a big 19th-Century house in Colebrook, New Hampshire, where they learned to drink Moxie and collaborate in writing science fiction and fantasy for children, teenagers, and adults. Following the passing of Dr. Doyle in October of 2020, new Debra Doyle Memorial Editions of their backlist, with new covers, updated formatting, special memorial pages, and all-new essays written by Jim specifically for these editions are being created. Jim intends to release them over the coming years in her memory.

As Munngralla says in The Price of the Stars, “It’s all for sale.”

You have subscribed to alerts for James D. Macdonald.

You have been added to James D. Macdonald's favorite list.

You can also sign-up to receive email notifications whenever James D. Macdonald releases a new book.