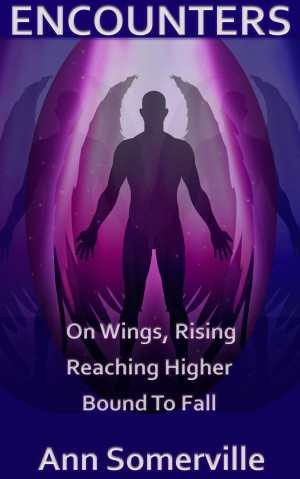 Three novels set in a world where genetically engineered winged humans —'Angels— were hunted almost to extinction, but now live safe and wild, away from other people. When invaders from another planet invade, collisions of beliefs and needs between races have profound effects on Angels, humans, and invaders alike, and individuals who fight against biological limitations to find love. More
Three novels form the complete 'Encounters' series in this anthology. All previously published.

Genetically engineered winged humans —'Angels— were hunted almost to extinction, but now live safe and wild on Quarn, untroubled except for the occasional fossicker like Dinun qel Noto. In 'On Wings, Rising,' Dinun's encounters with one very unusual Angel, Small Moon, sets the scene for more interactions between the races, which might lead to the salvation of both - or their destruction - when the Angels are attacked by offworlders, with tragic consequences.

In 'Reaching Higher', the defeated invaders can never go home. But when one, Kine Raelne, chooses to work with his captors, he finds his life and his world view turned upside down by the enigmatic and brilliant chimeric human, Suaj qel Gwan. Will enemies become friends? And where will that lead?

In 'Bound To Fall', Kine Raelne is settling well into his new life, working for Quarn to improve life for its people.
Dinun isn't faring so well. Life with the Angels can be hard for a weak human, however much in love he is with Moon.

The arrival of visitors from Rael's former home, throws everything and everyone into confusion. They offer opportunites, hope - and second chances. How can Rael and Dinun refuse?

Reviews of Encounters by Ann Somerville