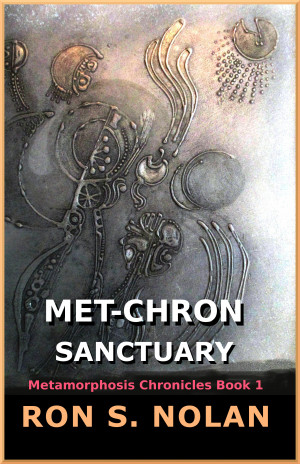 By Ron S. Nolan
In a last ditch effort to halt the disastrous global warming in the year 2029, scientists at the Deep Space Mining Moonbase launch satellites containing nano bots designed to seal off carbon emissions from the Arctic tundra. However when the rocket pods are released prematurely, they set off an EM pulse which is mistakenly interpreted as a missile attack--all out global war is imminent! More
It all begins in a biogenetics lab in Berkeley, California where Astra, a head-turning, Brazilian girl in her mid-twenties discovers the key to immortality—at least in flatworms. But she is forced to put her research on hold as a response to the blistering, white-hot winds rocketing through the Bay Area. Her new mission is to assemble cryogenic repositories (‘Arks’) of frozen plant and animal embryos to preserve them for the future. However, she is opposed by a fanatical religious group that will do anything to stop her. But is it the Ark that they really want…or something hidden within? Either way, they will have to go to the mining base on the moon to find out. Will the war be avoided or is it inevitable?

Dr. Ron S. Nolan lives in Aptos, California near the sunken ship at the end of the pier in SeaCliff Beach. He spends his days working out, running, writing and performing investigations as an independent tech patent researcher.

I was born as Roland Orn Scott, III in Goodland Kansas and until I was three, I lived in a farm shack that had no electricity, plumbing or telephone on a section of land which my father purchased from his parents who owned the Scott Ranch. My mother was a true beauty and as the story goes, was born in the caretaker's quarters of Emily Dickinson's carriage house in Amherst, Massachusetts and grew up in high style on Pelham Road in a house complete with a greenhouse, gardens and a lawn tennis court. After receiving her teaching credentials from Salem State College just as WW II wound down, she met my father, a handsome sailor at a local USO party, fell in love and was swept away to a shack located in the wheat fields of Western Kansas. My mom taught grades 1-6 in a one room school house—some of the kids rode horses to school which must have been a major culture shock, but ended abruptly when my student pilot father was killed in a mid-air collision with his flight instructor and burned to death before our eyes.

She remarried to William Joseph Nolan—a friend of my father Roland--who tragically had lost his family as well. When they married, Bill hadn&#39;t finished high school so he studied and passed his GED. Meanwhile he worked as a Holsum Bread truck driver, set ties on the railroad and finally opened a grocery store in Sharon Springs. During that time we lived in a run down former restaurant on the outskirts of town. Full of ambition, Bill ran for the office of Wallace County Sheriff and my mom ran for County Superintendent—both were elected. Bill went to sheriff school in Lawrence, Kansas and was so impressed with the fabulous Kansas University that after his term as sheriff (including one jail break and car chase) moved us to Lawrence where he became an honor student in Latin American studies and taught Spanish at Central Junior High School then went on to get his Doctorate in Latin American Affairs at K.U.

My mother also taught at Woodlawn Lincoln Elementary School and eventually attended KU where she became an Assistant Professor developing innovative reading curricula. We spent my 10th grade year in Cali, Colombia—quite a change from Lawrence. After I graduated from KU, they took leave of Lawrence and joined the faculty of the University of Western Kentucky where they went on to explore Mexico, Central and South America and socialized with artists, presidents, and local educators.

I was accepted into the graduate program at the UC San Diego Scripps Institution of Oceanography where I specialized in coral reef ecology building artificial study reefs in the lagoon of Enewetak Atoll in Micronesia. (Enewetak is one of the primary locations in the Telepathic Dolphin Experiment.) My original mission to Enewetak was to survey of fish populations inhabiting nuclear test craters where I camped out on Runit Island with fellow graduate students. Later on the Atomic Energy Commission found chunks of raw plutonium at our campsite and thought better about sending unprotected adventurers to the Runit Island where the Cactus Crater nuclear test crater is now covered by a massive concrete dome and rumored to be leaking radiation into the marine environment.

After completing my degree at Scripps, I founded an environmental consulting firm on the Big Island of Hawaii and an advanced technology marine shrimp hatchery and farm on Molokai which led to the formation of the Island Shrimp Shop in Encinitas, California and the North Shore Seafood Company in Ketchum, Idaho where my wife at the time and I shared great rapport with our own cast of world famous celebrities, actors and musicians. From there I became a Research Associate in Computer Engineering at UC Santa Cruz and worked with Dr. Patrick Mantey to develop some of the earliest interactive, multimedia CD-ROM titles. It was not until we had worked together for over a year that we discovered that he was also from Sharon Springs and as a kid had even worked as a grocery bagger in my father&#39;s market—small world!

I am now working on a new series of novels called the Metamorphosis Chronicles that explore the impacts of technology upon human longevity, the environment and society--quite a leap from my earliest years of sharing the outhouse with a nest of half frozen rattlesnakes and learning to read with the light of a Coleman lantern!

About the Series: Metamorphosis Chronicles

Metamorphosis Chronicles explores the future of a human society that is confronted with the threats posed by rampant climate change and AI androids and robots that are competing with Sapients and New-Humans for jobs and natural resources on an over-populated planet Earth controlled by profit-driven, corporate governments.

You have subscribed to alerts for Ron S. Nolan.

You have been added to Ron S. Nolan's favorite list.

You can also sign-up to receive email notifications whenever Ron S. Nolan releases a new book.