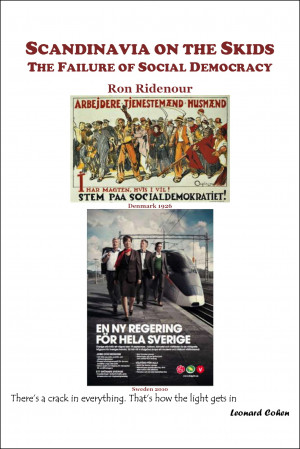 Scandinavia on the Skids: The Failure of Social Democracy

By Ron Ridenour
There is a good deal of misunderstanding what socialism and social democracy are. My objective here is to correct these misunderstandings, and point to a direction that would eliminate poverty and inequality, which free market globalization assures.
My background helps: reporter, author of nine books published in English, Danish, German, and Tamil. I have lived in Scandinavia for three decades, th More
Bernie Sanders and millions more misunderstand what socialism and social democracy are, and what economic-social system Scandinavia has been built on for the past decades. This is not a matter of concern only for the last election campaign in the United States of America (USamerica) but is important for everyone to know what these terms actually signify. That is my first objective.
My second objective is to explain that social democracy is failing in the countries that had adopted this form of capitalism, namely because the capitalist system, currently going under the name of free market globalization, no longer judges it is be necessary for their profits and world domination.
My final objective is to point us in a direction that could be of benefit to the whole world, and that requires an end of capitalism.
My work here is not primarily theoretical but mainly based on personal experiences from living three decades in Scandinavia (Denmark mainly), eight years in Cuba and seven more in other Latin American countries, 40 years USamerica, and traveling extensively in many other lands.
My writing in six of these seven chapters includes information from interviews and encounters I have had with leading politicians in Scandinavia, including former prime ministers of Denmark and Sweden a former president of Iceland.
My writing style often contains “the salty bite of authenticity in a Damon Runyan sort of way.” So wrote Theodore MacDonald, a former professor, author, musician and doctor, about my book, “Cuba Beyond the Crossroads.”
I have had nine books published in USamerica, England, Germany, and India. Six books deal with Cuba—the best know is “Backfire: The CIA’s Biggest Burn.” Others are: “Yankee Sandinistas”, “Sounds of Venezuela”, and “Tamil Nation in Sri Lanka”. I am the co-author of three other books, two in Danish.
This is my first attempt at self-publishing an ebook.
Download: epub mobi (Kindle) pdf more Online Reader
lrf pdb txt
Price: Free! USD
Add to Library
Create Widget
Tags: middle east russia vikings war and peace afganistan bernie sanders panama papers socialism and capitalism
About Ron Ridenour

Born in the "devil's own country", in 1939, of a WASP (white, Anglo-Saxon protestant) military family. Growing up I experienced the pains and indignities of US chauvinism and racism at home and abroad, its imperial domination, its brutal jingoistic wars.

Before I understood the essence of US imperialism, I joined the US Air Force, at 17, to fight the Soviet "commies" when they occupied Hungary, in 1956. Posted to a radar site in Japan, I witnessed approved segregated barracks at the Yankee base, and the imposition of racism in Japanese establishments. I protested and was tortured by my white “compatriots”, who held me down naked, sprayed DDT aflame over my pubic hairs, and then held me under snow. This, and the fact that we had orders to shoot down any Soviet aircraft over “our” territory in Japan—which never appeared—while we flew spy planes over the Soviet Union daily, led me to question American morality.

In shame and anger at what the US really does against peoples at home and around the globe, I took responsibility. My first demonstration was in Los Angeles, April 1961, against the Bay of Pigs invasion. The Cuban revolution, which sought equality and an end to racism, inspired me to become an activist. I helped build the budding student and anti-war movements just forming when I entered college, as well as participating in the civil rights movement. I was an activist during the 1964 Mississippi Freedom Summer campaign to force the state to allow black people the right simply to vote. I later supported the Black Panther Party, and other liberation movements inside the monster as well as revolutionary movements throughout Latin America.

Most of my activism from 1961 to May 1, 1975 was in support of the Vietnamese people's fight for their country, as well as Laos and Cambodia. I am most proud of that movement for having performed an important role in their victory over the US invaders. International solidarity, at the very least, helped shorten the length of the long war. Here are remarks by Vietnam's most important general, Vo. Nguyen Giap:

“The nationwide antiwar movement in the U.S. was a major contributing factor to Vietnam’s victory”. “Our intention was to break the will of the American government to continue the war. The U.S. ‘second front’ — consisting of millions of American civilians and GIs who expressed their opposition to an unjust war — helped bring it to an end.”

During the 1960s and 70s, I was jailed a dozen times for activism, once for half-a-year, and spent a week in a Costa Rica prison for trying to travel to Cuba during the October 1962 missile crisis. I was part of the Wounded Knee occupation by Native Americans (1974).

Soon after the end of the war against Southeast Asia, I obtained 1,000 censored pages of dossiers various National Security Council agencies had on me. FBI, CIA, Los Angeles Police Department's red squad all tailed and harassed me, even to the point of forging tax return papers in an attempt to convince the left and anti-war movements that I was a military spy.

I began working as a reporter in 1967. I was fired from three dailies (Hanford Sentinel, Riverside Press-Enterprise, Hollywood Reporter) for failing to self-censor my reportage and for union organizing efforts, as well as support for the Black Panthers. In the early 1970s, I reported for and edited several alternative“underground” weeklies, including the “Los Angeles Free Press” and the “L.A. Vanguard”.

In 1980, I moved to Denmark for love of Grethe and hate of the US. Between 1982 and 1996, I lived for a year in Nicaragua and worked for the Nicaraguan Sandinista government; and eight years in Cuba where I translated, wrote and edited for its foreign publishing house, Editorial José Martí, and its news agency, Prensa Latina. I later traveled to Venezuela and Bolivia and wrote about their revolutions. I did PR work for Bolivia's ambassador in Denmark 2008-10, and was one of two PR persons for President Evo Morales during the United Nation's COP 15, in 2009. Between 2009 and 2015, I wrote many articles and a book in support of the Tamil people of Sri Lanka, and spoke at many venues in India on the book and for solidarity, in 2011.

I have been a special correspondent or free lance for many publications in the US and several Latin American and European countries—among them: The Morning Star, New Statesman, The Guardian (US and England), Playboy, Liberation News Service, Pacific News Service, Coast, Qui, Skeptic, Sevendays, and Pacifica Radio...

I have written for many Danish publications--Copenhagen weekly, Politisk Review weekly, Relief, Information... I have also worked in ecological agriculture (Svanholm), lectured in schools, painted houses and held other odd jobs in Denmark. I have been an anti-war activist and have acted in solidarity with Iraq, Afghanistan, Colombia and Palestine. I am now a volunteer activist for Green Peace and Time for Peace (Tid til Fred). In latter years I have written for several websites.

“Cuba: Beyond the Crossroads”, Socialist Resistance, London, October, 2006. (A look at how Cuba is managing the special period.)

"Cuba: A `Yankee´ Reports", PapyRossa, Germany, 1997. (Only in German but English manuscript is in themes here.)

“Cuba at the Crossroads”, Infoservicios, Los Angeles, California, 1994. (A look at the early special period.)

“Yankee Sandinistas”, Curbstone Press, Connecticut, 1986. (Testimonies of US citizens living and working with the new Nicaragua.)

You have subscribed to alerts for Ron Ridenour.

You have been added to Ron Ridenour's favorite list.

You can also sign-up to receive email notifications whenever Ron Ridenour releases a new book.