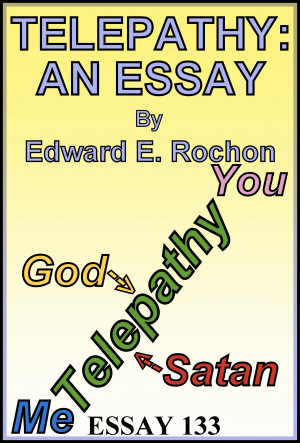 By Edward E. Rochon
Rated 3.00/5 based on 1 reviews
The case for and against telepathy. We uphold it as reasonable. It's expedient to accept it as a precaution. Eyewitnesses confirm it. Proofs against it do not exist. A malevolent spirit could obfuscate the matter to persuade both sceptic and believer of their opinions to the detriment of human happiness and virtue. Evil encourages both atheism and the occult to afflict mankind. More
A brief preface mentions the devil and angel at either ear in the cartoon. We support the affirmative position on telepathy and proceed to offer arguments. Chapter 1 notes how unsolicited thoughts pop into the mind all the time and see evidence of telepathy in that fact. We see many eyewitness testimonies of telepathy that the sceptic rejects as delusional without objective proof. Eyewitness testimony is accepted in courts of law with some reservations. The question of insanity and mental illness of many eyewitnesses is expected from the nature of the matter, especially with hostile telepathy. What do you expect from harassed individuals but mental stress, resulting in degradation of faculties? We note three basic types of possible telepathy. One: Immediate, two: mediate, three imagined with true imagination and false imagination as subcategories. Immediate telepathy is the usual definition. Two or more people communicate at a distance with each other directly. Mediate telepathy supposes a mediate force. Suppose men do not possess the power but angelic beings do. The demon places thoughts in the medium to persuade him of his power, though it is actually the demons. Upon testing by sceptics, the demon withdraws the power to promote atheism as a means of promoting his demonic agenda. Imaginative telepathy would be a mirroring of thoughts of others in our own mind that may be true or false. But people often talk at cross purposes, misreading arguments, and yet they still communicate with each other. Finally, where do thoughts and imagination come from? Our atoms come from without; we may suppose our psyche has the same source. We do not make our own bodies nor our own minds. This fact would entail telepathy of a sort by default. Chapter 2 shows that assuming telepathy is the more reasonable assumption for the thinker. We show scepticism to be hypocritical. He should not expect the believer to accept doubt to refute faith, but the believer is justified in expecting the sceptic to turn his scepticism on its own scepticism. We give several reasons for rejecting scepticism on telepathy: not in our interest to reject it, no proof of it being untrue, the majority of men throughout history accept it, a lie that scepticism produces virtue and reason in men, and scepticism is foolish and ill-advised in general.

No disrespect intended but why if telepathy does exist should you need to write a book about it. Why not beam it directly into my head and be done with it?