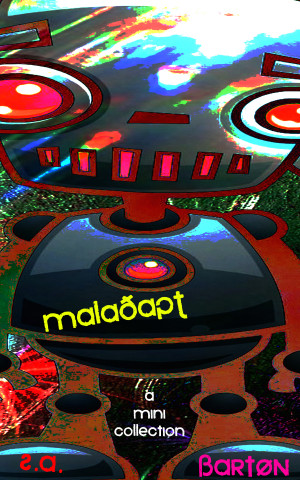 By S. A. Barton
Maladapt is a mini-collection of four short stories totalling just under 15,000 words.
These are stories about the struggle to adapt to the coming future. About coming to terms with migrating to a robotic body, to telepresence, to universal surveillance and what it means to those of us who don't quite fit in. They're stories about FAILURE to adapt, and the victories to be won beyond failure.

S.A. Barton lives in coastal Virginia with his wife, teen stepson, two under-5s, and demanding cat (as they all are). His path to the present was a strange, sometimes harrowing, and winding one; you may find this reflected in his writing. He has previously appeared in the pages of Penumbra magazine, in Daily Science Fiction, and in OMNI Reboot.

He is also proud to be a self-published indie author with dozens of short ebooks and collections to his credit, which may be found through sabarton.com. He also tweets far too much as @Tao23.

While most of S.A. Barton's work is in science fiction, some of it strays into other genres such as fantasy, mainstream, alternate history and others -- like the cat, it wanders some.

Learn more about S. A. Barton

You have subscribed to alerts for S. A. Barton.

You have been added to S. A. Barton's favorite list.

You can also sign-up to receive email notifications whenever S. A. Barton releases a new book.