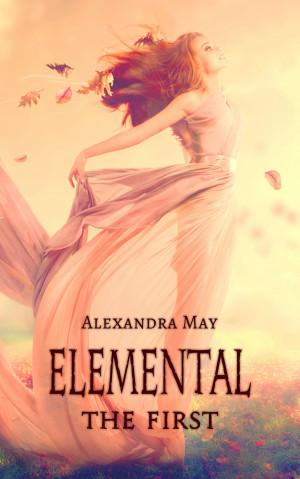 By Alexandra May
Rated 4.00/5 based on 3 reviews
When Rose’s parents go away on business overseas, she is left in the care of her grandmother. Ley lines, Stonehenge, and myth surround the isolated town. As Rose rekindles childhood friendships, she is drawn into a strange world where her secret gift finally gets discovered.
A warrior woman from the past haunts her dreams, but the truth lies in her ancient bloodline. More
Just who is Halíka Dacomé?

To Rose Frost, moving house every six months is normal. Another town here, another school there, her ability to adapt is as easy as breathing. But everything changes when her parents go overseas and Rose moves in with her grandmother. She enjoys meeting new friends and catching up with old ones from her childhood holidays -- except now she must hide a precious secret from everyone, a gift from birth that defies modern day science.

Her dreams become riddled with a warrior woman called Halíka Dacomé, but are they visions or messages from the future? She starts her own investigation but encounters more questions than answers. Living right on the edge of Warminster in Wiltshire doesn't help with its folklore and myths about strange lights in the sky and ghost stories of the Salisbury Plain.

Not only that, her troubles really take hold one night when the mysterious Aiden Deverill with his alluring smile, his gorgeous dark looks and hypnotising blue eyes, saves her from a freak fire. Or did he?

For Rose, her new life is beginning but she soon realises that despite assurances people are not always what they seem. What she always believed to be a happy family and a friendly town soon turns on its head when she discovers that her family secret, Aiden Deverill and the truth behind Halíka Dacomé is at the heart of the whole conspiracy.

This book is perfect for teens aged 14 or upwards.

Alexandra May is an English author of four books, bringing together the epic saga of Halíka Dacomé and her modern day equivalent, Rose Frost.

Elemental: The First, Elemental: Origin The Battle for Arcanon Major and Ethandun draw in Alexandra&#39;s love of strong women characters, sci-fi, history, romance and a little warmongering on the side!

For information on the series please visit her website http://www.alexandramay.co.uk

Learn more about Alexandra May

Reviews of Elemental: The First by Alexandra May

Elemental: The First is the beginning of the Primord series by Alexandra May and from the beginning, it draws the reader in. It tells the story of Rose, a girl who constantly moves because of her father's job, as she discovers just who she is meant to be. From the moment she was born, it was clear that she was different and when she grew up, her differences became more real. She had a gift -- to heal and to kill -- and no one claims to know why. It is set in a period of Rose's life when she is being separated from her family for the first time and she is moving in with a grandma that her parents had cut ties with. The novel is full of betrayal, romance, mystery, and a little bit of action.

The plot was a different kind of reincarnation than previously explored in any books I've read. It is and it isn't reincarnation at the same time. Okay, to be honest, I'm not quite sure how to categorize it until the second book comes out. There was several surprises and twists that caught me off guard such as what characters were chosen to play a big part and which took smaller parts despite how they were introduced. I loved all of the history used throughout the book as well as the different myths and stories told throughout the story. The whole story held a lot of mystery and left a lot of unanswered questions that I expected will be answered in the sequel. It didn't leave me angry because of the unanswered questions but rather, I knew that there was more to be answered.

Rose was an interesting main character at the beginning because I didn't know how to read her. A lot of the first few chapters displayed her weaknesses as a character and her uncertainty in herself. Not that there is anything wrong with that, for I don't expect every character I read to to be cocky or self obsessed. I think it was refreshing but I had a hard time grasping her personalities when it began. The ties between her and Halíka Dacomé was cool even though it wasn't as explored as I would've liked it to be. I loved that despite the fact that she was physically strong, her greatest strength was her courage, hope, and trust. Although they are often thought of as naive, I thought that these were the best qualities of her.

Now onto the two lovely men who are vying for Rose's affections (sort of):

Aiden was the bad boy love interest for Rose with his violent past and unsavory character that everyone isn't afraid to warn her about. I think that the way he was raised had a lot to do with how he treated people and the way he acted. I've dealt with kids who based on their background have become traumatized to the point where they display their trauma by doing it to other kids. I gained both respect (which I am sure many of you think is undeserved) and hope for this character that no one seemed to like. Sometimes, I think it the people that are screwed up and aren't perfect that make the best love interests because it requires to main character to give a lot. A broken person needs only help to heal.

Morgan was the golden boy of the story, the 'everybody's choice' love interest for Rose. From the moment the story begins, it was all about how perfect he would be for her and how she needs to just trust him. It made me extremely wary because it seems like the greatest guys always have the darkest intentions -- even though Aiden most certainly has dark intentions but that's expected. To me, he felt comfortable and easy for her to be with and the relationship wouldn't require growth for either character. He was so sweet though, he cared a lot about Rose especially when I questioned other people's motives. I think there is a lot going on behind the scenes for his character as whole that I would love to know more about.

Basically, I don't know who she is ending up with and yeah... Stupid love triangles, always making me wait to find out who is better for the character.

I adore all of her friends, okay that's not entirely true. I loved Hannah, Jez, and Mira but I can't decide of that's because they play the biggest parts or what. Can we discuss the cutest couple in the whole story? Hannah and Jez are undeniable the most adorable side couple ever. I can't wait to see it grow into something more. Honestly, I can't wait to watch all of the characters grow and mature throughout the books. Her grandma Daisy is another awesome character to watch out for with all of her fun qualities and interesting dialog. She keeps you on your toes during the book and was one of the most likable characters from the beginning of the story.

Overall, it was awesome. I am dying to read the next book. Check it out for yourself, you won't be sorry.

It was a little hard to get into initially but the last 50 pages were excellent. Looking to read more.

I liked Elemental: The First it was filled with suspense and I was constantly trying to figure out what was going to happen next. Elemental: The First gives a lot of background information of the characters and the town. Normally, I find too much detailed information and not enough action to bore me but Alexandra had a perfect balance between the two. The ending did bug me because I was hoping that we would find out a bit more of what exactly Rose does and more about Aiden and Morgan but it ended right where the suspense was the greatest! Such a cliff hanger! I was in shock that it ended like that. It was like a TV Show finale that is split into 2 weeks and ends with your going NO I NEED MORE WHY THE HECK WOULD YOU END IT THERE ARRRG!!!

You have subscribed to alerts for Alexandra May.

You have been added to Alexandra May's favorite list.

You can also sign-up to receive email notifications whenever Alexandra May releases a new book.