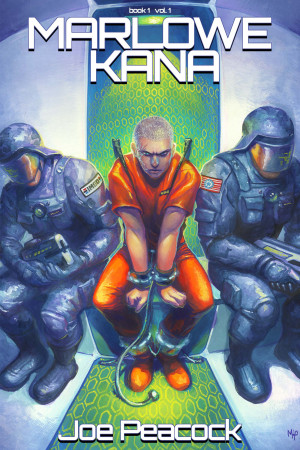 By Joe Peacock
Major Marlowe Kana has just been found guilty of treason against the United American State! Every Feed on the Net has been covering the events of her trial, and two questions remain to be answered: What will happen to MK, and what will the nation watch now that the Next Top Soldier Hall-of-Famer and star most-watched Feed in history is locked away? The answer shocks the nation to its core. More
*** Volumes 2 & 3 now available! ***

"Dude! I blew through Volume 1 on the plane to Omaha! So good! I'm so hooked!"-- Matt Chapman, Co-Creator, Homestar Runner

"If William Gibson had any literary heirs -- the family tree would include Warren Ellis, Jonathan Hickman, and now... Joe Peacock, a powerful youngster in a genre that could use a jolt to the system. Peacock writes with expediency and para-military precision. His characters don't just leap off of the page -- they strap on jetpacks -- and blast out of it. If you are into Black Mirror, Bruce Sterling, or the cyberpunk genre, this IS the book you need to have in your life."-- David Gallaher, Vampire: The Masquerade, Green Lantern, Incredible Hulk, Iron Man

"If Ghost in the Shell and Neal Stephenson's novels are things that catch your interest, you owe it to yourself to check out cyberpunk expert Joe Peacock's first scifi novel."-- Olliver Kirby, Funimation

It's 51 years after the Second American Civil War. The 40 million citizens of the United American State are aghast to find that their biggest celebrity, Major Marlowe Kana of the Imagen Military and Security Division (MilSec), has just been found guilty of treason. Every Feed on the Net has been covering the events of her trial, and two questions remain to be answered: What will happen to MK, and what will the nation watch now that the Next Top Soldier Hall-of-Famer (and star of the most-watched Feed in history) is locked away? The answer comes almost immediately and shakes the country to its core.

About the Series: Marlowe Kana