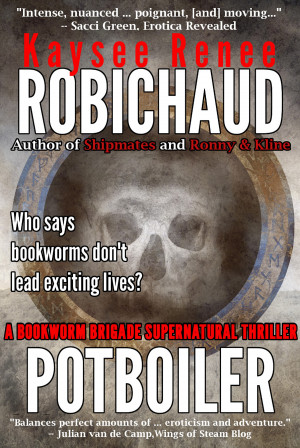 By Kaysee Renee Robichaud
The Bookworm Brigade hunts grimoires and moldy books of ancient lore, sealing them away from those who would use them to do the most harm. On her second bit of field work for the Brigade, Parnik Venkateswaran and her partner Charlotte head to Louisiana on the trail of a mysterious cult and their volume of arcane knowledge: The Silenium Ecclesiastices. More
Unseen by most, there is a world where magic, monsters, and madness yearn to be freed from ancient prisons. The Malleus Libram is a secret society dedicated to claiming the books of lore from those who would use them to unleash cosmic dread upon the world. They are The Bookworm Brigade.

Parnik "Venkat" Venkateswaran is a young page with the Malleus Libram. Her second outing teams her with a veteran partner, a tough as nails woman named Charlotte Bennett, and takes her far from her New England stomping grounds.

In Louisiana, a group called the Silent Seven have been practicing dark acts from a mysterious volume titled The Silenium Ecclesiastices. While the cult have not yet used the secrets within to drag aside the curtain veiling the mundane world from one brimming with cosmic horrors, it is only a matter of time before their profane curiosity will threaten the fabric of existence. Without The Ecclesiastes, however, the damage they can inflict is minimized.

Can Venkat and Charlotte recover this work before they fall prey to the now paranormally powered members of The Silent Seven?

Kaysee Renee Robichaud has been publishing her erotica and romantic fiction since 2008, through such well known book pulishers as Circlet Press, Ravenous Romance, Cleis and Alyson Books. Her work has appeared in numerous anthologies, including the Lambda Award finalist Women of the Bite, edited be Cecilia Tan. An audio version of her story "Adrift" appeared as episode 226 of the Nobilis podcast.

Kaysee Renee has lived all over the United States, but currently resides in southern Texas, where the winters are actually a lot like her childhood autumns. The summers, though, are pretty rough. She is eternally grateful for air conditioning, though a little sweat is good for the fiction.

About the Series: The Bookworm Brigade

A secret society searches for ancient books of blasphemous lore, battling the madmen who seek to use them to unleash ancient horrors into the world . . .

Also in Series: The Bookworm Brigade

You have subscribed to alerts for Kaysee Renee Robichaud.

You have been added to Kaysee Renee Robichaud's favorite list.

You can also sign-up to receive email notifications whenever Kaysee Renee Robichaud releases a new book.