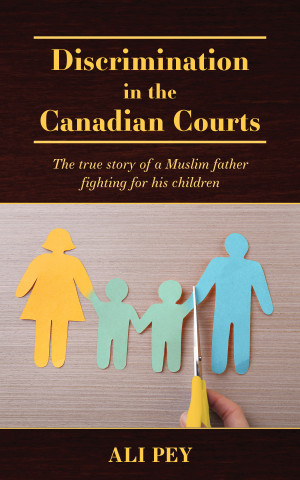 Discrimination in the Canadian Courts: The true story of a Muslim father fighting for his children

Ali Pey came to Canada from Iran as an experienced engineer in 2000, and he's since worked hard to build a successful career and raise his two daughters. Like many other immigrants, he proudly became a Canadian citizen and assumed that he would be treated fairly and equitably in an unbiased legal system.

Imagine his shock when, during divorce proceedings with his white ex-wife, he faced intense discrimination and prejudice by multiple judges, police officers, case workers, a court-appointed psychologist, and even his own doctor. Despite his competent and gentle manner, particularly with his daughters, he was painted as physically abusive and emotionally unstable, and his time with his children was severely reduced while he was made to be the only working and supporting parent.

This book is a true story and a collection of indisputable and well-documented facts. In this heart-wrenching account, readers are invited on a journey into the underbelly of the Canadian legal system that shares:

- documented court records demonstrating a clear pattern of discrimination;
- astounding fallacious statements submitted in the judge's rulings that invent a story to justify the desecration of the Quran and reference purely made-up police involvement;
- his five-year struggle to clear his name and receive reasonable time with his daughters.

Reviews of Discrimination in the Canadian Courts: The true story of a Muslim father fighting for his children by Ali Pey

You have subscribed to alerts for Ali Pey.

You have been added to Ali Pey's favorite list.

You can also sign-up to receive email notifications whenever Ali Pey releases a new book.