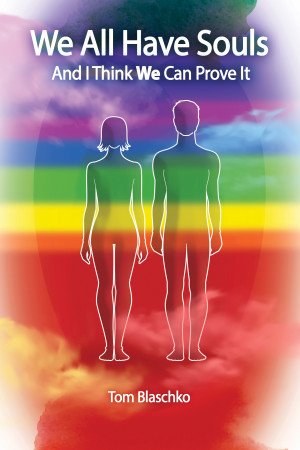 We All Have Souls and I Think We Can Prove It

It’s not one thing. It’s everything all together that shows that we all have souls. And that’s what this book does — puts everything (well, a lot of things) together to show that souls are the best explanation for what we experience.

The book is not religious. But it suggests how acknowledging we all have souls can help us lead healthier, happier, and more connected lives. It looks at some deep philosophical ideas, including the nature of proof, but it’s written in simple English. It answers important questions, but asks questions, too. It reminds us what we know now and leads us to places where we can learn more.

We All Have Souls is a book that wishes to change the world. It looks at what souls might be and how science and common experiences prove that they exist. It offers a path to more loving and fulfilling relationships.

When you read the book, you can add to the proof that we all have souls.

Tom Blaschko has had a handful of non-ordinary experiences. He has been practicing karate since 1970. Life force (ki) is a large part of succeeding in that practice. On the night Tom’s uncle passed on, his spirit came to say goodbye to Tom— before Tom knew what had happened.
Tom earned a Bachelor’s degree in astronomy from Caltech and Master’s degree in developmental psychology from SUNY — Buffalo, so he is pretty well grounded in the science of ordinary reality.
The incompatibility of non-ordinary experiences and the laws of science was a puzzle — and Tom loves to solve puzzles. Could non-ordinary reality and ordinary reality be combined in a way that left both mostly unchanged? Tom’s answer is yes, and he uses his background and experiences to describe how ordinary and non-ordinary coexist in our world and why honoring this combination makes the world better.

About the Series: We All Have Souls

We All Have Souls looks at what a soul might be and the evidence that souls exist. Books in the series look at how we can heal and grow to live more joyous, meaningful, and connected lives.

You have subscribed to alerts for Tom Blaschko.

You have been added to Tom Blaschko's favorite list.

You can also sign-up to receive email notifications whenever Tom Blaschko releases a new book.