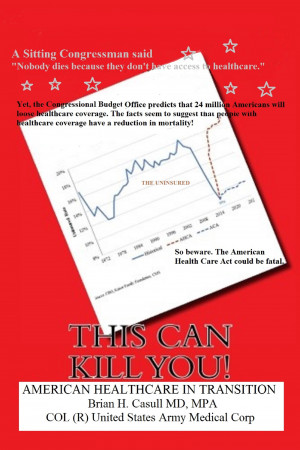 This Can Kill You

What the author wishes to share is the very pertinent topic of Healthcare in America in transition. As a physician Executive and retired United States Army Medical Corp Pediatrician and Hospital Commander, he has first hand experience as well as a knowledge base from almost 40 years in health care.
The author feels strongly about providing affordable healthcare to many of our vulnerable fellow Americans. He was nudged “into the fray” by a comment from a Congressman who stated that no one ever died from lack of health care. Although the Congressman walked back this statement, the fact that vulnerable Americans might be at risk of the ultimate negative health care result (death) continued to trouble the author.
There is much about healthcare that hasn’t been discussed that is eminently germane to any discussion of the subject. The author has tried to go beyond partisan bickering and ideology and concentrate on the confounding variables that must be wrestled with as you take up the subject of the health care. Like you and many other Americans, what motivates the author is to do what is right. Not just what is politically expedient.
After spending twenty-one years in the United States Army, the author went on to a varied and successful career in Medicine. The lesson learned while commanding in the military-as a physician you can make a difference in people’s lives one person at a time. Even from his position as Chief of Pediatrics at various assignments. As a “Physician Executive” (Commander), the opportunity to help large groups of people became a reality.
Following retirement from the Military, the author followed a pathway that touched many of the sections of the medical community. These included Medical Director for the Rocky Mountain Rehabilitation Center (Colorado Springs, Colorado), Chief of Staff at the Cigna Staff Model (Long Beach), Medical Director -The Traveler’s Insurance Company (Los Angeles), Los Angeles Medical Director for UnitedHealthcare, and Assistant Vice President for a Pharmacy Benefit Manager PCS in Arizona.
While at PCS, the opportunity presented itself for him to again serve the military active duty and retirement community. The author became the Corporate Medical Director for TRICARE Health Care Contractor TriWest HealthCare Alliance.
After multiple years in that role, the author formed his own Professional Limited Liability Healthcare Consulting Company. Along the way he has obtained an MPA in Health Care Organizations, become a "G" Gauge Model Railroader, done Musical Theatre and taken up the ukulele. Two of his proudest life experiences include becoming the grandfather of eight and the continued relationship with his wife Rebecca Ann of fifty years (and still counting). 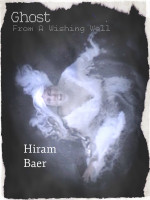 You have subscribed to alerts for Brian Casull.

You have been added to Brian Casull's favorite list.

You can also sign-up to receive email notifications whenever Brian Casull releases a new book.