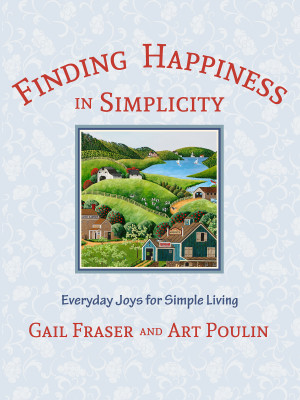 There is a beautiful ease and extraordinary uniqueness to the rhythm of everyday life. Finding Happiness in Simplicity opens a window into this world and provides a path to a more purpose-driven existence, one that is filled with all the things worth having--friends and neighbors, love and faith, curiosity and passion. Here we may discover that happiness is not born of overindulgence, and that more is not better than less, nor is fast better than slow.

Life often passes by in such a flurry that we seldom see the joys offered to us each day. But when we take the time to stroll along a country road, or plant a row of seeds, or listen to the morning song of crickets, our lives can become infinitely richer.

Spring's bare earth gives way to summer's abundance, and nature lavishes us with gifts at no cost. And as the leaves begin to fall and the days get cooler, it is time to honor friends and family with celebrations that revel in the smells, sights, and sounds of the season. When winter comes, we can anticipate the promise of joy and delight in the new year as we sit by the fire with our loved ones. It is that path of gentle living that will gracefully shape our lives and lead us to a more authentic happiness.

Combining the reassuring words of author Gail Fraser (author of the Lumby series) and the extraordinary art of internationally-acclaimed folk artist Art Poulin, Finding Happiness in Simplicity offers a deeply compelling message that we need only look at the smallest parts of happiness to bring us closer to a more fulfilling life.

Gail Fraser is the author of The Lumby series, which includes The Lumby Lines, Stealing Lumby, Lumby's Bounty, The Promise of Lumby, Lumby on the Air (Penguin NAL '07-'10), Lost in Lumby (Lazygoose Publishing 2017) and Between Lumby and God (coming 2018). Additionally, she and her husband, artist Art Poulin (www.artpoulin.com), collaboratively wrote and illustrated Finding Happiness in Simplicity, hardcover Globe Pequot Press. Gail is currently writing the seventh novel in the series which will be released in 2018.

Gail was born and raised in Rye, New York. She studied at the University of London before returning to Skidmore College where she earned her BA in English Education. She completed her MBA at the University of Connecticut, with graduate work done at Harvard University. Prior to changing her life and becoming a novelist, Gail had a successful career in 'corporate America' holding senior executive and upper management positions in several Fortune 500 and start-up corporations, and working extensively throughout the world. When taking a break from writing, Gail is also a graphic design artist who is licensed internationally. You can see her designs at www.gailrfraser.com.

Ten years ago, Gail and Art built their own Lumby - a 40 acre gentleman's farm in rural upstate New York, which has been featured in several national magazines and newspapers, as well as on PBS. They will soon be moving to Florida as both are avid open-water and pool long-distance swimmers. When not writing, Gail tends her vegetable garden, orchard and apiary, and plays the flute.

You have subscribed to alerts for Gail Fraser.

You have been added to Gail Fraser's favorite list.

You can also sign-up to receive email notifications whenever Gail Fraser releases a new book.