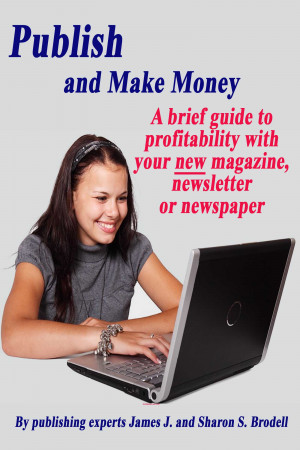 Publish and Make Money: A Brief Guide to Profitability With Your New Magazine, Newsletter or Newspaper

James J. Brodell is a retired newspaper owner and college professor. He considers himself a skeptic or an iconoclast, perhaps due to the 50 years as a reporter and editor. After retiring in 2018, he began writing short stories and novels that reflected in some way what he had learned during his career. His working career includes stints as editor and reporter in New York, New Jersey and Colorado and newspaper ownership in Colorado and Costa Rica. He founded A.M. Costa Rica, an English-language online daily, in 2001 and with his wife, Sharon, ran it until his retirement in 2018. He won academic tenure at Metropolitan State College in Denver, Colo., where he taught journalism and reporting for 11 years. He and his wife of 55 years live in northern Georgia where he frequently considers the ease with which Americans accept the official story. He also attributes his 20-plus years in Latin America for his critical view of institutional corruption both there and in the United States. Never one to go along to get along, Brodell tries to interject his skepticism and irreverence into his written work.

Reviews of Publish and Make Money: A Brief Guide to Profitability With Your New Magazine, Newsletter or Newspaper by James J. Brodell & Sharon Brodell

You have subscribed to alerts for James J. Brodell.

You have been added to James J. Brodell's favorite list.

You can also sign-up to receive email notifications whenever James J. Brodell releases a new book.