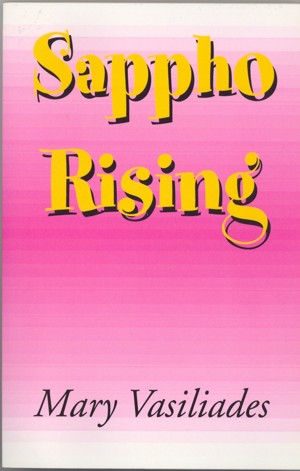 By Mary Vasiliades
Sappho Rising is a fast-paced, rousing story that follows the parallel lives of lovers Hillary and Iris, whose homophobic families forced them to separate. One becomes a successful fashion photographer and the other, a fugitive living underground with a new identity. All hell breaks out when Hillary begins her frantic search to find Iris, no matter the consequences.
Available ebook formats: epub mobi pdf rtf lrf pdb txt html
Price: $2.99 USD
Buy Add to Library Give as a Gift
How gifting works
Create Widget
Tags: romance suspense political lesbian psychological
About Mary Vasiliades

Mary Vasiliades is a novelist/playwright who combines her writing with her feminist adctivism and political concerns. She has been a newspaper reporter, magazine editor, speechwriter; several of her plays have been produced 0ff-off Broadway. In addition, she helped organize mass demonstrations for women's rights and held leadership possitions in feminist oganizations. Her activities have been documented in a CD, "Memoirs of a New York Feminist."

You have subscribed to alerts for Mary Vasiliades.

You have been added to Mary Vasiliades's favorite list.

You can also sign-up to receive email notifications whenever Mary Vasiliades releases a new book.