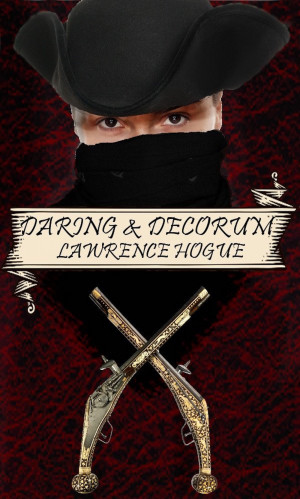 Daring and Decorum: A Highwayman Novel

Will the story of the highwayman's past – complete with a tyrannical husband, a gloomy castle, and a daring escape into London's underworld – persuade Elizabeth to abandon propriety in favor of passion? In the end, can the lovers make an independent life in a world where women are little more than property, evading both the redcoats and the jealous young lord who would tear them apart?

Daring and Decorum is comedy of manners wrapped around a gothic tale; a mashup of Jane Austen, Alfred Noyes' poem The Highwayman, Robin Hood, and Moll Cutpurse; and a passionate case for the freedom to love whom one chooses, Daring and Decorum: A Highwayman Novel should appeal to fans of Ellen Kushner's Riverside series, Emma Donoghue's Life Mask, and Michelle Martin's Pembroke Park (billed as the first lesbian Regency).

Lawrence Hogue's writing is all over the place and all over time. He started out in nonfiction/nature writing with a personal narrative/environmental history of the Anza-Borrego Desert called All the Wild and Lonely Places: Journeys in a Desert Landscape. After moving to Michigan, he switched to writing fiction, including contemporary stories set in the desert and fanfiction based on the videogame Skyrim. He’s a fan of folk music, and got the idea for Daring and Decorum while listening to Loreena McKennitt’s outstanding adaptation of Alfred Noyes’ poem, The Highwayman. When not speaking a word for nature or for forgotten LGBT people of history, he spends his white-knighting, gender-betraying energies on Twitter and Facebook, and sometimes on the streets of Lansing, MI, and Washington DC. He's sometimes been called a Social Justice Warrior, but he prefers Social Justice Wizard or perhaps Social Justice Lawful Neutral Rogue.

You have subscribed to alerts for Lawrence Hogue.

You have been added to Lawrence Hogue's favorite list.

You can also sign-up to receive email notifications whenever Lawrence Hogue releases a new book.