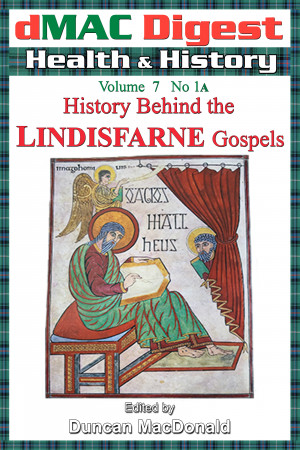 dMAC Digest Vol 7 No 1A - History Behind the Lindisfarne Gospels

By Duncan MacDonald
Rated 5.00/5 based on 2 reviews
We trace the history surrounding The Lindisfarne Gospels, one of the world’s greatest masterpieces of Latin calligraphy and illumination; from when it was written at the Holy Island of Lindisfarne, through the Viking attacks, to its current resting place in the British Library. More
The Lindisfarne Gospels is one of the world’s greatest masterpieces of calligraphy and illumination. It was written and illuminated at Lindisfarne around 695 to 700. It contains the gospels, Matthew, Mark, Luke and John, in Latin. We trace the early history of the Holy Island of Lindisfarne and the travels and tribulations associated with the gospels, as the monks try to evade Viking attacks and other predators.
Download: epub mobi (Kindle) pdf more Online Reader
lrf pdb txt
Price: Free! USD
Add to Library
Create Widget
Tags: illumination vikings lindisfarne holy island caligraphy lindisfarne gospels celtic monastry latin caligraphy venerable bede
About Duncan MacDonald

An interesting book recounting a part of history about which many of us know very little. A great resource too I think for author looking to write about the period in question.

an excellent book--very interesting--I have read John Blandly's books on Bede, Caesar, and his versions of King Arthur's tales, as well as modern versions of Irish myths, like "How Diamuid Got His Love Spot," and am very interested in early British and Irish history, and the Celts in general--this fascinating book uncovers many details of Northern England, at the time it was being converted to Christianity.
Highly recommended.