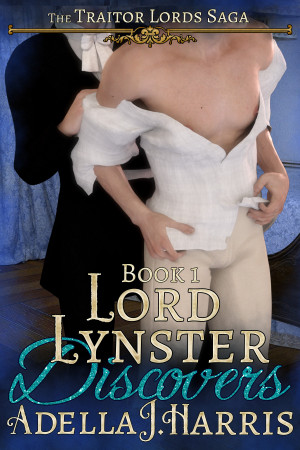 By Adella J Harris
Rated 5.00/5 based on 2 reviews
When butler Daniel Rivers finds his employer, the Earl of Lynster, has shot himself rather than be arrested for treason, his first thought is to protect James, the new Lord Lynster, a man he’s secretly been in love with for years, even if it means letting suspicion fall on himself. James, the new Lord Lynster, knows the Crown suspects him of being a part of his father’s plot. More
Three traitor lords plotted to kill the king; now their sons must deal with the aftermath.

When butler Daniel Rivers finds his employer, the Earl of Lynster, has shot himself, confirming he was one of the traitor lords plotting to kill the king, Daniel’s only thought is to protect his childhood friend James, the new Lord Lynster, from the scandal. He’s been quietly looking out for Lord James ever since the day by the pond when James’s “experiment” of a kiss proved to Daniel that he loved the young lord.

James had heard rumors of traitor lords and a plot to kill the king, but he didn’t realize his father was one of them until he read a newspaper story hinting the traitors were on the verge of being arrested and finds his father has shot himself rather than be tried, making James the new Lord Lynster. Fortunately, his father’s butler, Daniel Rivers, found the body. Daniel knows James’s deepest secret, and James knows he can trust Daniel, even when the Crown decides they’d like another traitor lord to put on trial.

When it’s discovered there may be more traitors involved in the conspiracy than the ones the Crown already knows about, James will need all his resources to prove he isn’t one of them. And Daniel will do anything he can to keep the former Lord Lynster’s scandal away from the son, even if it means allowing himself to be suspected.

About the Series: The Traitor Lords Saga

Three traitor lords plotted to kill the king; now their sons must deal with the aftermath.

The story was very well written and very captivating. I couldn't torn myself away from it.

I quite enjoyed the story, so sweet and well written. Looking forward to more of your work!