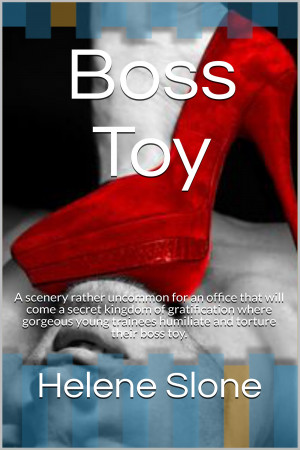 "Guess that was him agreeing," I gurned.
I sat on Marty's chest and stared deeply into his eyes, taking a moment to savour the fear and humiliation and the complete degradation of spirit that I saw reflected there. And to know I was the cause of it all, this was just the horniest thing!
Marty was in a real state by now. Such a state that although I was topless he could no longer muster an interest in the renewed proximity of my gorgeous tits. No hard-on for little Marty this time. He wasn't even noticing my globes.
One of us was sexually excited however. My panties were gushing wet. I was so getting off on this, the enormous power I had and the delicious knowledge that I had it because I was a drop-dead beautiful girl. I was behaving like the meanest bitch on earth and because the boss was a sadistic bastard who was besotted with me I was not only getting away with it I was being actively praised and encouraged!
More than that, I was smugly aware that wealthy and powerful men like Jason Rose would keep finding themselves smitten by me and hence I would continue to be pampered and spoiled and indulged, would be given everything in life that my little heart desired. I was having the time of my life and I knew that things were only going to get better and better for me.
The unfairness appealed to me. Turned me on something rotten, in fact.
Like, the wretched Marty here was utterly at my mercy and I wasn't about to show him any. Because the terrible truth is I'd started to view Marty more as dumb debased animal than actual person by this point. This poor thing who had suffered so much already was going to get tormented some more and I was going to relish every second of it!

As a result, they grow their personality as they know their true sexuality, that inhabited also by violence and unspeakable abuses. So often fear holds us back – of what others will think of us, of what we will think about ourselves – and we don’t follow our hearts. These people push past that fear.

You have subscribed to alerts for Helene Slone.

You have been added to Helene Slone's favorite list.

You can also sign-up to receive email notifications whenever Helene Slone releases a new book.