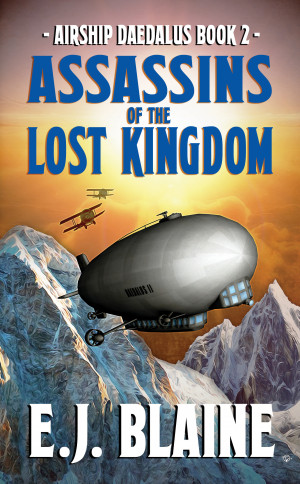 By E.J. Blaine
Strap in for high flying pulp adventure as ace pilot Jack McGraw and Dr. Dorothy Starr track a sinister occult society bent on murdering the captains of industry. Can the crew of the experimental airship Daedalus locate the hidden valley in the heart of the Himalayas and stop an old enemy before it's too late? More
July, 1926 finds ace pilot Jack McGraw and scientist Dorothy “Doc” Starr, hot on the trail of evil agents murdering prominent captains of industry—a trail that leads them to face an old enemy they thought vanquished. With the backing of Thomas Edison's A.E.G.I.S. foundation, Jack and Doc use their light reconnaissance airship Daedalus to travel to the Himalayas, where a deeper mystery unfolds. Together with their crewmates, suave English radioman Edward “Duke” Willis, curmudgeonly Bronx mechanic Carl “Rivets” Holloway and laconic Cherokee sharpshooter Charlie “Deadeye” Dalton, they delve into local customs and ancient lore surrounding the “Eye of the World”, a hidden kingdom in the heart of the mountains known as Shambala, where the only antidote to the world's deadliest poison still grows wild.

Based on the Airship Daedalus retro pulp comic strip by Todd Downing and Brian Beardsley, Assassins of the Lost Kingdom is the first novel from author E.J. Blaine, who brings the fun and excitement of classic adventure stories to the fore. Mobsters, mad science, secret societies, occult threats, and lost worlds meet globe-trotting, sky-high aerial adventure and two-fisted heroism, like the pulp novels of old!

"Airship Daedalus: Assassins of the Lost Kingdom has everything you'd hope for in a pulp adventure. Crafted in the mold of its predecessors from the 1920s, the book has a bit of everything. Adventure, intrigue, danger—and most of all, atmosphere. I'd recommend it to fans looking for hints of late-era steampunk, 1920s pulp adventures, Indiana Jones, or just people looking for a fun, fast adventure."

E.J. Blaine has enjoyed a writing career best described as “eclectic.” While working as a trade journalist covering the telecommunications and energy industries, he moonlighted for a major media company, covering upcoming genre films for its print publication and writing movie reviews and other content for its web site. He produced background material and scenarios for a number of role playing games, and occasionally published short fiction. He attended the prestigious Clarion workshop for science fiction and fantasy writers.

He lived in Vancouver, British Columbia for several years where he attended film school and worked in the Canadian film industry as a story editor. While there, he also wrote film and comic book scripts, and did development work for animation and live action television.

Currently, Blaine lives in Virginia with his wife and infant daughter, where he is massively overextending himself in an attempt to write fiction while dealing with a very demanding baby.

E.J. Blaine tells stories because it's fun, and the best part of that is sharing them with readers and getting their reactions. You can find him online at ejblaine.com

Reviews of Airship Daedalus: Assassins of the Lost Kingdom by E.J. Blaine

You have subscribed to alerts for E.J. Blaine.

You have been added to E.J. Blaine's favorite list.

You can also sign-up to receive email notifications whenever E.J. Blaine releases a new book.